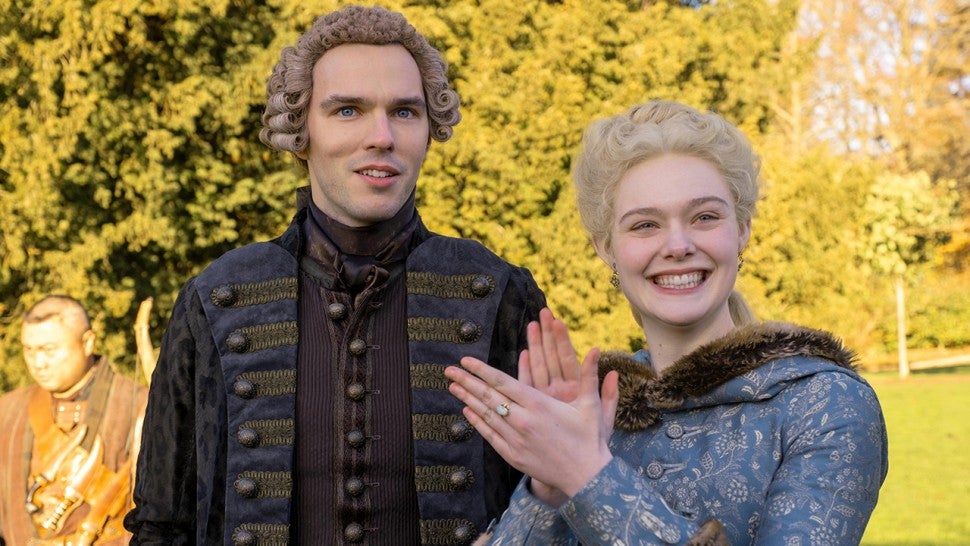 Since Peter III reigned for only six months and lost his throne due to a coup by Catherine, one easily assumes he was not well-liked. Still, this vile, narcissistic, “madman” Peter overlooks his real progressive reforms in Russia. Just how vile? One scene has the Court eating dessert off the same tray as the heads of fallen Swedish soldiers. As nearly every male at Court is a fool or a drunk, or both, the genitalia “jokes” are non-stop. It all gets rather old and tiresome very quickly. Now on Hulu, I give ten-part series The Great 2.5 Gavels while it receives an 84% Rotten Tomatoes rating with an 81% Audience score.

Arriving in Russia in 1862, Catherine is certain of a great love of Peter, and that they will do great things together. To the contrary, she finds him coarse, disgusting, mercurial, an idiot. When she proposes a school, Peter burns it down when he finds out Catherine intends to educate women. After all, “women are only for procreation.” Marial advises Catherine that if their is no heir, the throne goes to the Empress. Now, the real seduction, the seduction of allies, must begin!

As Banished does a great disservice to Governor Arthur Phillip, Nicholas Hoult does the same to Peter III. Certainly, he is merely following the director’s wishes, but do you really want this gross, oafish performance on your resume? If I were Elle Fanning, I would jump as the chance to play Catherine the Great, leader of the Golden Age of Russia. Still, I hope she read the script before she accepted the part. The amount of buffoonery she must tolerate is almost beyond pale. The sole saving grace of those first three episodes was Phoebe Fox, most recently of The Aeronauts. Really, it is she who seduced the critics.

“Marriage is a struggle on a number of levels,” Grigor tells Peter. Peter responds, “You didn’t tell me how tricky.” “Until one is in it, one cannot imagine.” replies Grigor. Huzzah, Huzzah, Huzzah, would be the appropriate snicker in The Great. Created by the same guy who wrote The Favourite, let’s say this has the same flavor, neither to my liking.

One critic’s view is “it’s probably best to think of the series as a collection of very dark comic sketches. Some miss to the point of being deeply uncomfortable to sit through… And the ones that hit are explosively funny.” Two others write “much of this played for black comedy, but it just ain’t funny…” and “The Great grows tediously and even torturously long – which may be its cruelest joke of all, as its appreciable style and sass surrender to repetitious rounds of palace intrigue.” How much are you willing to tolerate? It’s on to The Mandalorian for me.