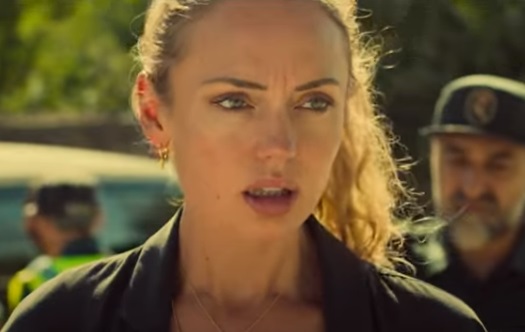 Start with a dash of The Godfather, add a pinch of Hamlet, finish with a huge dollop of daytime soap, and you get White Lines. On the heels of of the music snobs in High Fidelity, we get snobbery of a higher order with DJ’s on Ibiza. We are told that this island approximately 100 miles east of Valencia in the Mediterranean Sea has the best DJ’s, the best house music, and the best dance music. Some will be certain that White Lines refers to the easy availability of the best lines of cocaine. Despite the gratuitous Game of Thrones-like sex scenes, the first three and last two episodes were quite good. The rest were quite maudlin. I give White Lines 3.0 Gavels and it receives a 64% Rotten Tomatoes rating with 6.0/10 IMDb score.

Twenty years earlier, the disappearance of her brother caused Zoe Walker to plummet into the depths of depression. During a freak rain in the desert hundreds of mile from Ibiza, the body of Axel Walker is found. Told that Spain has a twenty year statute of limitations on murder and there will be no investigation, Zoe travels to the island to find the murderer. Axel’s three best friends from Manchester remain on Ibiza, Marcus, Anna, and David. All were present at Axel’s blowout 25th birthday party, the night he went missing. All have secrets. Most of all, they know that Axel was a thorn in the sides of the Calafat and Martinez families for the control of clubs, drugs and prostitution on Ibiza.

Laura Haddock (Guardians of the Galaxy, Transformers) takes us to the gorgeous island, and non-stop parties, of Ibiza. As Zoe Walker, she displays vulnerability, determination, and sheer exasperation in a multitude of no-win situations. Resemblant of Angelina Jolie, Marta Milans (Shazam!) is Axel’s former girlfriend, Kika Calafat. Kika and her mother both had eyes for Axel. Nuno Lopez, an actor likely unknown to American audiences, is the best of the lot. He plays Boxer, the “head of security” for the Calafat family, unable to say ‘no’ to anyone, including Zoe.

Romanians are the go-to thugs and drug distributors of the 2010’s. Expect the violence, like the sex, to be excessive. The reference to Hamlet gives a hint to a sub-plot in White Lines. I can’t remember the last time I saw a film with a true Oedipus Complex. Is Kika the Michael Corleone of the Calafat family?

As a joint production between the Brits and the Spaniards, it is only appropriate that I bring you comments from across the pond. The critic for The Daily Mirror writes “with lush Instagram-filter worthy shots of blue ocean waters, luxury villas, sensual sex scenes, and bloody confrontations on yachts and in clubs, there’s something of everything you could want for a binge-watch…” On the other hand, the critic for the Independent notes that “despite promising elements,” he found it “dull.” So, there you have it. Really, this is another case of of too many episodes for the material at hand. In other words, expect Netflix to order a Season Two.