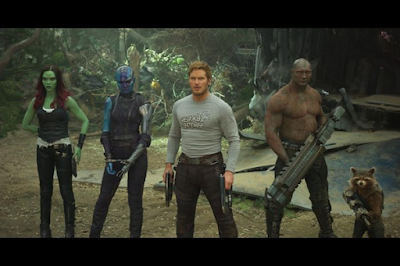 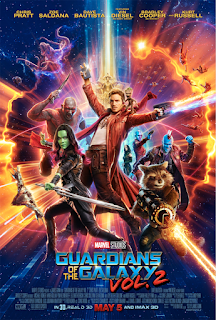 After seeing some of the reviews this week, the question was “What would it take to get Five Gavels?”  This may be as close as we get for a while.  Most importantly, it is a fun, wise-cracking movie that entertains.  Yes, it is profane at times, but remember this is Hollywood.  And while Groot is cute, I am somewhat surprised by the PG-13 rating.  Then again, the raters probably assume that 13 year olds have probably already heard this stuff.

Like the Fast and the Furious, it has a family theme, but it also has a story and actors that you care about. This is a true ensemble cast and all have major parts, not just Chris Pratt and Zoe Saldana. Further, the film is a visual delight, colorful and busy.

But, what really sets this movie apart from nearly all others is the music.  This is likely to be one hot soundtrack. (Do they still have those?) The movie starts off with Brandy, moves on to Hooked on a Feeling, and never lets up.  Groot dancing is a hoot.  Throughout the movie there are funny iconic references that you won’t miss. (Sample–Mary Poppins, Pac-Man, David Hasselhoff) And even the final credits offer some good material.

Chris Pratt as Peter Quill, Zoe Saldana as his green maybe love-interest Gamora, Dave Bautista as the big galoot with heart of gold Drax, Bradley Cooper as the voice of Rocket, and Vin Diesel as the voice of Groot are back to save the galaxy again.  As Rocket says ‘how much will they be worth if they save the galaxy a second time?”  Michael Rooker returns as bad guy(?) Yondu who kidnapped Peter as a child.  Karen Gillan (Nebula) as Gamora’s sister and Pom Klementieff (Mantis) raised by Peter’s father were great additions.  As our heroes double-cross the Golden People, it is Peter’s father (Kurt Russell) who saves them.  Since Peter never knew his father, the movie fills in the backstory.

If you liked the first Guardians, you will like this one even better.  While seeing the first Guardians may be helpful to the newbies, I don’t think it is absolutely necessary to follow the story line for this movie.  Even if you don’t like this genre, you will appreciate the music.  It is a part of Americana that we all know.  It is as familiar as family.  Go get your ticket!