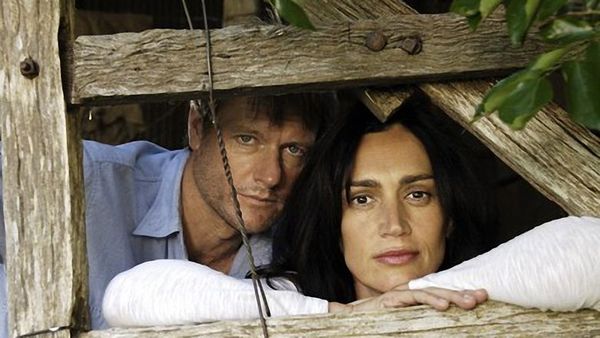 In our recent cinematic travels around the world, we see the good from Africa (The Boy Who Harnessed The Wind) and the bad from India (She). The roller coaster swings upward again in Unfinished Sky from Australia on Amazon. Receiving Best Screenplay, Best Actress, and Best Actor awards from the Australian Film Institute in 2008, this one is well worth your time. While the topic of human trafficking caused me to delay watching it for some time, and it depicts some cruelty, Unfinished Sky also shows a depth of tenderness rarely seen. John and Tahmeena, sitting side-by-side, finishing a puzzle, appears so simple, but yet has such chemistry and tension. I give the film 4.0 Gavels and it receives a 90% Rotten Tomatoes rating with an 82% Audience score.

Blaming himself for his wife’s death six years earlier, John lives a lonely, unkempt life in the Outback. A female (Tahmeena) stumbles onto his property, filthy, bruised and beaten, speaking no English. He has little sympathy for illegals until he crosses paths with Bob, the local hotel owner, who tells him that one of his “cleaners” has run away. Slowly, they learn to communicate, and trust each other. Tahmeena has a daughter somewhere in Australia. In a sparsely populated area, will John be able to keep her safe before trouble assuredly arrives?

As an Aussie, William McInnes (John) doesn’t cross our paths. Unfinished Sky shows he is an accomplished actor, who by the way, has also written ten books. While portraying an Afghan refugee here, Monic Hendrickx (Tahmeena) is actually Dutch. Interestingly, her first film was The Polish Bride, the Dutch entry for Best Foreign Film to the Academy Awards in 1998. Unfinished Sky is the Australian adaptation of that movie. As you might now guess, she plays the lead in both films.

Cliche that it is, the best stories are those, like an onion, that slowly peel away giving new answers to the lives we are watching. And, even in the most difficult time of the new “relationship,” the movie mines humor in a dog named Elvis. Tahmeena surprises by singing the words to Heartbreak Hotel. Above all, Unfinished Sky offers hope. Like the unfinished puzzle, you know that Tahmeena and her daughter will be “home” soon, with John, immigration problems notwithstanding. Folks, this is a good one, and you will be happy you finished it.