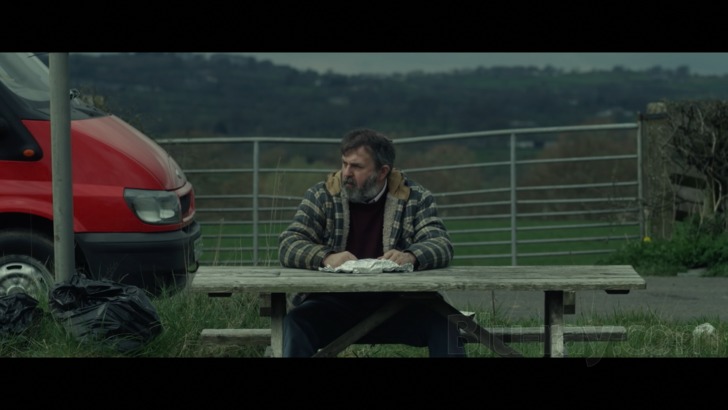 From sex trafficking in Australia (Unfinished Sky), we go to sex trafficking in Northern Ireland. Except, Bad Day For The Cut throws a big curve at you. Suppose, just suppose, that your dear sweet old mama just ain’t quite as innocent as you thought she was. Trust me, you are about to have a bad day. Throw in a fiendishly cruel boss lady with some typical, witty Irish dialogue, and the critics love this one. Although the prime premise in Bad Day For The Cut is “revenge times two,” the characters and violence are similar to the recent The Gentlemen. How about another twist? Can you ever trust a man who tried to kill you? I give this film 3.5 Gavels and it has a 92% Rotten Tomatoes rating with a 73% Audience score.

Donal lives the quiet life as a bachelor who must stay on the farm to assist his elderly mother. One night, he awakens to her cry for help. Seeing a car with two intruders leave, one a “fancy” man, Donal finds her dead, head bashed in. After the funeral, he hears a commotion in the barn. Shotgun in hand, Donal is outgunned by two men sent to kill him. Why would anyone want to kill the two? Why did his mother have an envelope of cash under the mattress? As they say, the plot thickens!

One look at Nigel O’Neill and you know he was in The Game of Thrones or the Vikings. He was in both. As Donal, he brings the perfect amount of strength and vulnerability to the role. Susan Lynch is an Irish actress of some renown, seen in Downton Abbey and Killing Eve. She brings a frightening sense of viciousness to her character, Frankie. On the other end of the spectrum is Josef Pawlowski. He is such a decent sort, caught in the middle, searching for his sister.

The Irish must like their county music. Like Wild Rose, (one of my favorites), sit back and enjoy. On his death bed, you begin the film with a guy named Leo. Do not forget about Leo! A couple of critics comments are pertinent. One writes A Bad Day For The Cut is “an unusually soulful genre outing with an endearingly rumpled Nigel O’Neill as an ordinary man turned gun-totin’ vigilante.” The second notes “there is a strong suggestion that cycles of vengeance merely go around and around, an observation of particular poignancy for a country with a recent history so mired in conflict and one that in making Bad Day For The Cut is at its most insightful.” You get lots of Irish brogue here, so feel free to turn on the subtitles. Do so, and Bad Day will turn into a good night for viewing.