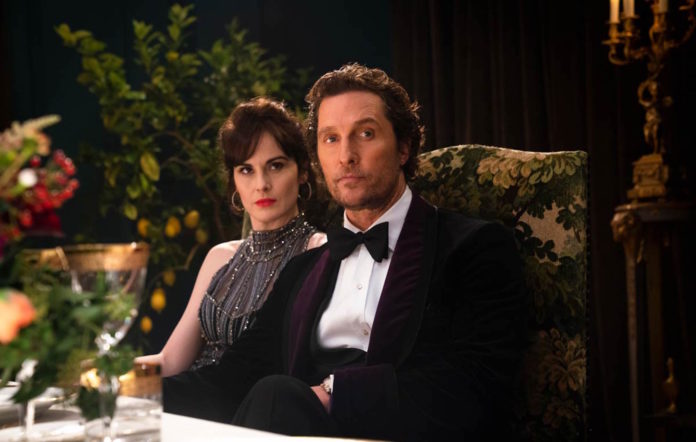 To be sure, the Brits are a witty and creative lot. Guy Ritchie, ex-husband of Madonna, director and writer of The Gentlemen, certainly fits in that category. But, if you are expecting a repeat of Sherlock Holmes or Aladdin, that was the PG-rated Ritchie. The Gentlemen is the R-rated version. This script is laden with profanity, violence, graphic sexual references, and drug content. Throughout it all, the actors love their oddball, criminal characters, and it shows. This movie is not for the feint of heart. or those with tender constitutions. The Gentlemen are vying for the English drug trade, and intimidation is part of the “game.” Or, as Mickey Pearson says, “When the lion’s hungry, the lion’s gotta’ eat!” I give the film 3.5 Gavels and it receives a 77% Rotten Tomatoes rating with no audience score as yet.

Mickey Pearson is ready to retire with his beloved Rosalind. A deal is struck with Matthew Berger to pay $400 million for Pearson’s marijuana business. Others want in, but at a much reduced cost. Interruptions occur threatening to upset the deal. At the same time, a private investigator named Fletcher, wants a cut or he will sell his information to the tabloids. The hyenas are nipping at the heels of the lion!

This is a wonderful ensemble cast. Matthew McConnaughy, as Mickey, and Charlie Hunman, as his consigliere, are exceptional. Michele Dockery makes the transformation from Downton Abbey upper class to street-wise Rosalind with ease. Likewise, Hugh Grant as Fletcher, both P.I. and narrator, is far from his Love Actually character. In fact, this may be his most memorable part ever. Henry Golding, Colin Farrell, and Jeremy Strong round out the group.

Expect lots of double-crossing in The Gentlemen. Ritchie does his best to keep you guessing, sometimes with black humor, and sometimes just with the macabre. Be on your toes as the dialogue comes at you fast and furious. This is the kind of movie that is hard to recommend; you either like this genre or you don’t. Critics see it as “slick, silly fun” or “bloated and been done before.” Peter Howell of the Toronto Star sums it up well writing, “Prepare to be entertained, if you enjoy watching charismatic actors act naughty, talk dirty and shoot first.” These are not gentle men. Yet, they are interesting men (and women) if you give them a shot (pun intended).