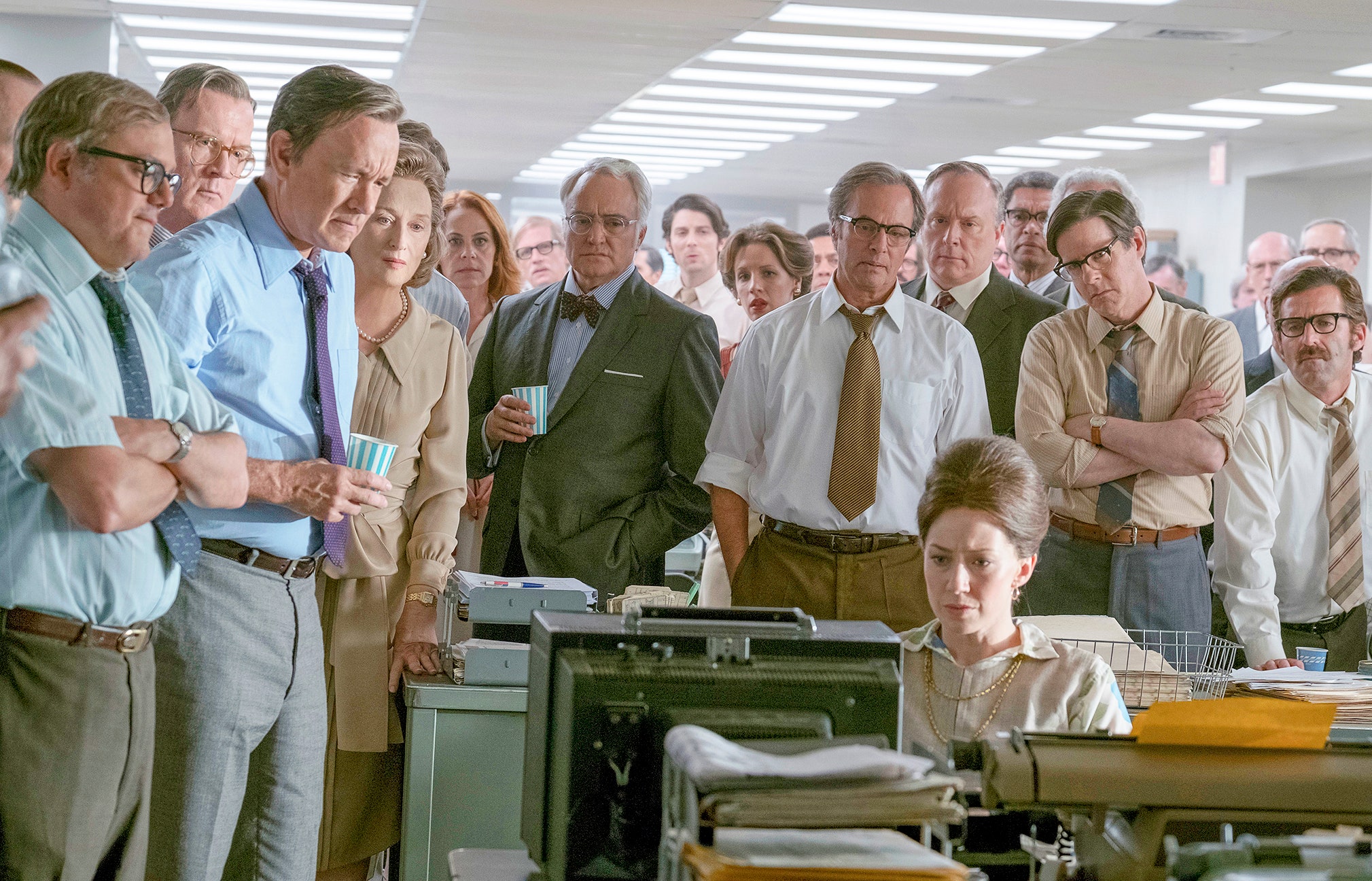 The verdict is in!  I put the spotlight on The Post and it is not nearly as good as Spotlight.  This is a solid movie but one sometimes hard to follow.  That the government lies (excuse me, puts its own spin) to us is nothing new to anyone who grew up in the Vietnam/Watergate era.  History buffs will want to examine this story but, as shown by the  numbers above, the story is not real audience-friendly.   Kay Graham, making tough decisions in spite of the advice of counselors and knowing that jail and loss of her company were possibilities, deserves the praise heaped upon her.  As the only woman in a man’s world, the condescension was frequent, blatant and glaring.  It was a different time; one we should all be glad is past.

The movie opens in 1963 with Robert McNamara, Secretary of Defense, asking Daniel Ellsberg about the lack of progress in the war.  Then, just a few minutes later, McNamara tells the press that the war is being won.  A disgruntled Ellsberg leaks the Pentagon Papers to the New York Times in 1971, and later to the Washington Post.  A federal judge issued an injunction against the Times, and its agents, to prevent further publication.  Ben Bradlee, editor, is mad that the Times got the story before the Post and is determined to publish.  Graham’s paper is struggling and is trying to take the paper public.  The initial offering takes place while this crisis is ensuing and some financial backers are threatening to scuttle the sale of stock.  The government is threatening contempt.  Bradlee was very close friends with Kennedy.  Graham was close friends with McNamara.  And Ms. Graham was trying to celebrate her birthday.

Meryl Streep is Kay Graham and worthy of her Best Actress nomination.  She depicts Graham as a woman sometimes giving the outward appearance of being in over her head.  At times, she wonders what she has gotten herself into.  While her change of demeanor at the end was a little too abrupt, I have no doubt that Ms. Graham became The Boss.  On the other hand, Tom Hanks, as Ben Bradlee, was not Best Actor nomination worthy.  He’s done lots better work than this.  Sarah Paulson, as Mrs. Bradlee, had a very small part but great lines describing “bravery.”  Bob Odenkirk, as a harried reporter who knew Ellsberg, was wonderful to watch.  Tracy Letts was oddly emotionless as one of her advisors.  On the other hand, Bradley Whitford made up for it as one of her trusted board members.  Bruce Greenwood has the look of Robert McNamara.  But the best casting of all was Matthew Rhys as Daniel Ellsberg.  In today’s climate, who else could play Ellsberg but the Russian spy on The Americans.

While I found this to be an interesting movie, given all the hype, I was a little disappointed.  The director tried to use music to give a sense of urgency, but failed.  Here is one case that some of the courtroom drama in the US Supreme Court would have been helpful.  But, of course, that would have messed up the narrative that the press will save the world for democracy; they would have had to share the spotlight (there’s that word again) with the judiciary.  Bottom line–not great, not bad, don’t rush out into snowmageddon to see it.  It didn’t deserve a Golden Globe; it doesn’t deserve an Oscar.