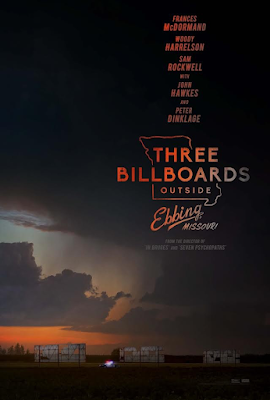 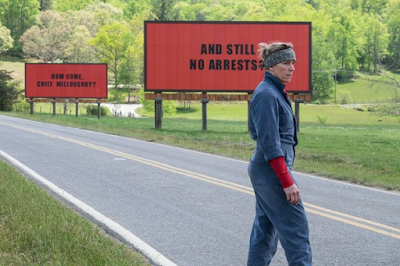 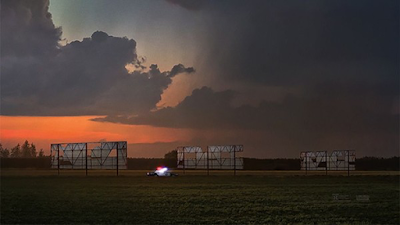 Warning: If profane language offends you, this movie will really offend you.   But if you are willing to peel through the layers of the characters, this movie is a fine piece of cinema, not easily categorized.  And despite what you think you may know about this movie, it is not a whodunit.   It is a what’s left of people’s lives after the crime happened.  It is not a pretty sight, although there are some very funny moments among some very stark events.

Mildred Hayes’ daughter was raped and killed seven months prior to the start of this film.  The police have no suspects, no leads.  Mildred wants them to “focus,” so she rents three billboards to shame them.  As might be expected, the police are not happy, but the townspeople, while sympathetic, are also not pleased.  Deputy Dixon, a man with many demons, is urged by his mother to put pressure on Mildred to take down the billboards.  Her son, Robbie, and her ex-husband, Charlie, are also unsupportive.  As Mildred tries to deal with her pain, her actions become more and more desperate as we learn more and more about the events leading to the violent death of her daughter.  Over and over, the audience is confronted with the unstated question, “What would you do if the police had not found your daughter’s killer?”

It will be very surprising if France McDormand is not nominated for an Oscar for Best Actress.  Her pain and rage are written all over her expressive face.  Likewise, Sam Rockwell as Dixon is just as terrific as the racist police officer, so much so that he almost becomes a caricature.  As you think this may be an anti-cop movie, it moves in a different direction, thanks to Rockwell.  Woody Harrelson, as Chief Willoughby, surprises over and over as his character gives background to the events that have transpired.  Peter Dinklage has a small part, mostly forgettable.  If you watch Madame Secretary, you will enjoy Zelijko Ivanek as a police sergeant.  Lucas Hedges as Robbie and Caleb Landry Jones as Red, the young owner of the billboards, round out this cast nicely.

After seeing The Star and Wonder this last week, this movie was a nice change of pace.  The dark humor, the tense confrontations, and the pressure to solve the crime amid ongoing personal crises will keep your attention glued to the screen.  Given the setting, the profane language, while needlessly excessive, did make this flick grittier, more believable.  All in all, this is an impressive effort, by the screenwriter, the director and the cast.  Put this one on your list to see; people will be talking about it.