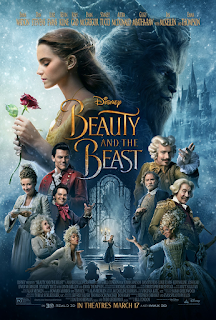 Nobody throws a party like Disney!  As a rule, we should always be skeptical of remakes. Except to make hundreds of millions of dollars, there was no good reason to remake this movie. The Jungle Book remake was okay, but not noteworthy. What could Disney possibly add to this story we have seen over and over since childhood?  As the critics have noted, a few mediocre songs were added and some additional unnecessary story line was fleshed out. The movie is probably 15 minutes too long. But, even with all these “negatives,” Disney has hit a home run!  B and the B is mesmerizing; there is so much going on that it is impossible to see it all in one viewing.  It seems like there is something happening in every square inch of the movie screen.

Emma Watson is imminently likable as Belle.  While some critics claimed certain voices not of stage quality, I thought Luke Evans as Gaston and Dan Stevens as the Beast were terrific.  Josh Gad as Gaston’s sidekick is a hoot.  Add Kevin Kline, Ewan McGregor, Stanley Tucci, Emma Thompson, Ian McKlellan, Gugu Mbatha-Raw and you have a Who’s Who  in the entertainment industry.  Who has a better voice than Audra McDonald?

Belle is just as “odd” as ever, i.e., she likes books.  Gaston is as much a narcissistic lunkhead as ever.
The Beast growls with great ferocity, but is just a “softie” as ever.  The point is that, “as old as time,” this story (and music) works whether animated, on stage, or with real live characters. Judging from the packed audience and parking lots, Disney will make hundreds of millions of dollars so they can continue to throw parties like no one else.

If you don’t enjoy this movie, you should probably revisit Grinch and search for your teeny-tiny heart.  TMJ’s wife gave this movie five gavels, but we “real” critics only give those out sparingly.
Can a remake ever get five gavels?  Probably not.  One needs new or original material to get five gavels.  Having said that, I enjoyed this movie as much as she did, but don’t tell her!