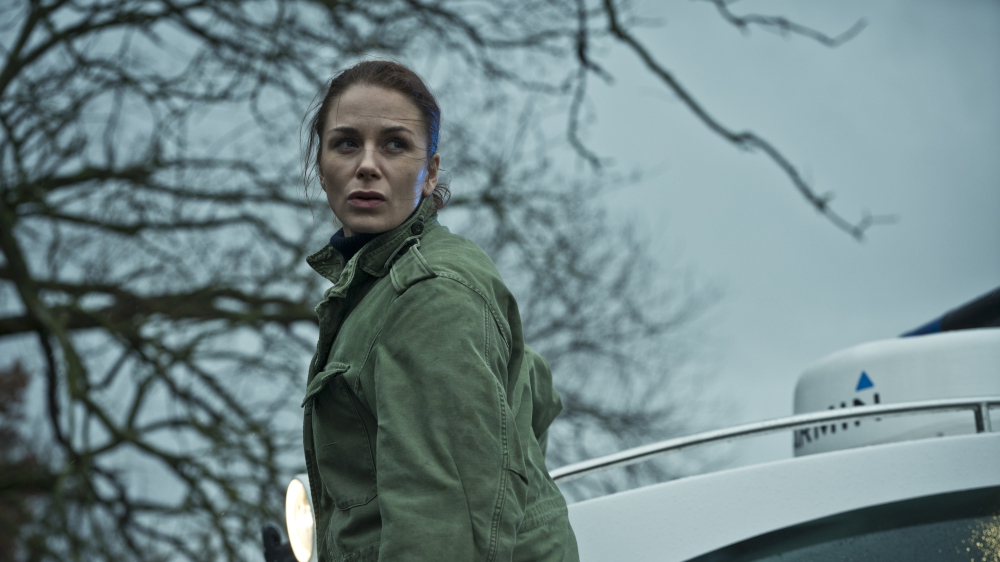 With the infusion of money from streaming services, The Thaw is just one example of the drastic improvement in production values of shows from Eastern Europe. After Cold War, The Mire, and Signs, it’s been nearly two years since I’ve reported on an offering from Poland. Now, on HBO Max, The Thaw aka Odwilz, will impress, and perhaps even ensnare you in the six part police drama. Two episodes dropped April 1st and the remainder Fridays through April. For the past six months, Detective Katarzyna Zaweija searches for clues for the death of her husband on the Oder River. On assignment to the local Prosecutor investigating human trafficking, he’s found with a bullet in his head. Unable to find any evidence of foul play, the Prosecutor concludes it was suicide.

Stunned by the official position of the Prosecutor, a bitter Katarzyna arrives at the scene of the death of a homeless man in downtown Szczecin. Her partner, Trepe, is ready to conclude no crime committed until a witness flees. The chase leads to a dumpster where they find an umbilical cord and placenta. Forensics indicates someone dumped the evidence within the last twenty-four hours. Police Chief Pietrzak orders Katarzyna to find the mother and child. Much more sophisticated than many crime thrillers, the twists keep coming. Well acted and written, I give The Thaw 3.5 Gavels and it receives an early 7.3/10 IMDb score.

As Katazyrna and Trepe begin their search for the missing mother, they receive a report of a female body found on the riverbank. Opposite an old coking plant, it’s immediately apparent that the woman just gave birth. But, where is the child? Shortly, a coat is found on the opposite shore. In it, they find the ID of Dr. Magda Kosinski, a psychiatrist. She is the daughter of District Prosecutor, Michal Strzelecki. Strzelecki didn’t approve of his daughter’s husband, Marcin, Suspect #1. But, Katarzyna suspects blackmail or revenge, not spousal murder. The plot thickens.

Unknown to American audiences, but impressive nonetheless, is Katarzyna Wajda as Katarzyna Zaweija. My daughter-in-law attended university in Poznan, Poland, birthplace of Ms. Wajda. A city of over 500,000 with a reported 130,000 students, it has a beautiful Renaissance Old Town, well worthy of a visit. It’s Poland’s fifth-largest city. Well to the north, near the border of Germany and close to the Baltic, you will find Szczecin. Poland’s seventh-largest city and a major seaport, it has over 400,000 residents.

What is the motive for murder? If not the husband, is it his organized crime creditors? Is it some recently released prisoner getting even with the District Prosecutor? Are human traffickers after babies and Magda in the wrong place at the wrong time? The Thaw hints that more suspects are on the horizon.

“The image of a woman trapped under ice, lifeless, brings to mind the now mythical discovery of Laura Palmer’s body at the beginning of Twin Peaks. And just like in the show, the discovery rolls down the hill and traps everybody around it, taking them on a journey of discovery of a secret, some people just don’t want to see come to the surface.” Fiction Horizon

“The story feels engaging because the details of the investigation and of Zawieja’s life are scattered around carefully and intentionally, like breadcrumbs in the deep, dark woods.” Cineuropa

After two episodes, the story is 4.0 Gavels but the melodramatic dubbing drags it down a touch. Still, it’s a good whodunnit.