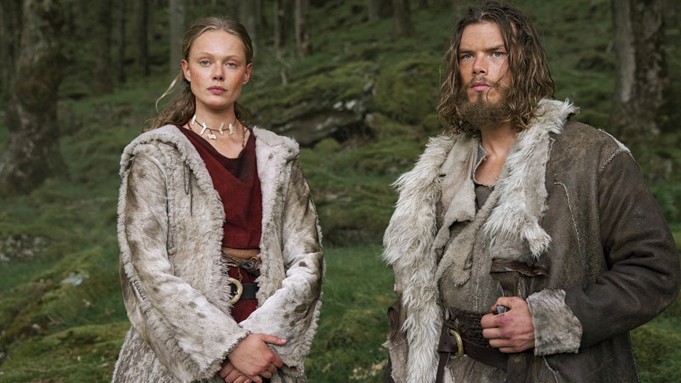 If you need your Ragnar Lothbrok and Lagertha fix, tune in to the excellent Vikings: Valhalla series on Netflix. Set 100 years after Vikings, seen on the History Channel, there are lots of references to those two plus Ivar the Boneless and Bjorn Ironside. Like the Vikings and The Last Kingdom, these are a vicious lot, not above beheadings and the murder of innocents. Yet, there are more twists and turns in this eight-part series than a road winding its way up the French Alps. Binging was oh-so-satisfying. For those just dipping your toes into the waters in and around Kattegat and the North Sea, it’s not necessary to watch Vikings before Vikings: Valhalla.

In the 11th Century, the Vikings co-exist with the Saxons in England, so much so that most forget their native tongue and some become personal guards to King Aethelred II. The Saxon nobles demand a solution to the Vikings problem. Late on St. Brice’s Day, after celebration and much drinking, the King summons his guards to the castle. Not only are the Vikings guards caught unaware and killed, Aethelred orders the massacre of all Vikings. One year later, King Canute summons Vikings to gather for revenge on the English. Their goal is not land, nor treasure, but the head of Aethelred.

And so, the saga begins, all united. Except, The Christian Vikings hate the Pagan Vikings. Aethelred dies before the Vikings arrive, and ‘boy king’ Edmund faces his own foes, particularly, one nobleman from Mercia. Factions held together by a thread can unravel in one quick conspiracy. Well done, and based on historical characters and events, though fictionalized, this one grabs your attention. I give Vikings; Valhalla 4.0 Gavels and it receives a 100% Rotten Tomatoes rating and a disappointing 6.4/10 IMDb score. (Note that Vikings has a 8.5/10 IMDb score.)

Children of Erik the Red, aka The Great Berserker, Leif Erikson and sister Freydis Eiriksdottir arrrive in Kattegat from Greenland on their own mission. As a child, pagan Freydis was raped by a Christian Viking and she demands revenge. The man responsible is one of King Canute’s key figures in his planned attack on London. Events transpire whereby Leif will be required to fight for Canute in order to save the life of his sister. The Greenlander will have to prove himself over and over. Meanwhile, Freydis becomes a sheild-maiden to the ruler of Kattegat, Estrid Haakon. Let the backstabbing begin.

In 1883, Elsa tells a cowboy suitor, “you’re prettier than me. In any relationship, I want to be the pretty one.” That quote comes to mind as you view the two main characters, Leif and Freydis. While Freydis is blonde and statuesque, Leif may be the prettier of the two. All the way from Australia comes Sam Corlett to play the Greenlander Leif. A model and the face of Maybelline, Frida Gustavsson (The Witcher) is Freydis. Did both explore North America? Another model, Laura Berlin, captures the screen as Queen Emma of Normandy. Both historically and in Vikings: Valhalla, she may be the most cunning of all.

Vikings: Valhalla has so many great characters, Earl Godwin and Olaf Haraldsson, to name just two more. Both are devious in their desire for power. It is fair to say that some of Vikings: Valhalla is repetitive to its predecessor, as one attack on Kattegat looks similar to another. After all, you can only axe your enemies in so many ways. And, you have seers in both. Still, it’s a different time in history and the writers engage the audience.

“The saga’s connections to epochal events and people are so fascinating and cleverly worked, it’ll be extra rewarding to watch it with your Wikipedia open.” San Francisco Chronicle

By moving from the History Channel to Netflix, the Vikings once again prove they know how to find gold. So confident is Netflix, they’ve already ordered three seasons of Vikings: Valhalla. I’m all in.