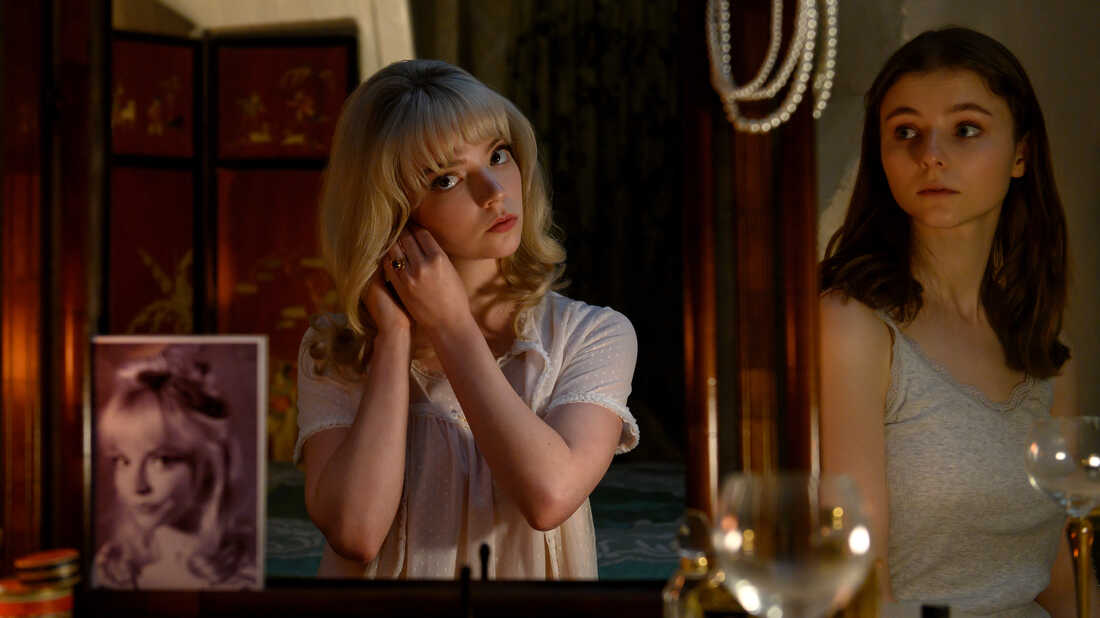 At various times, one might conclude Last Night in Soho is about deteriorating mental health, a psychological horror film, a slasher serial killer, or sex trafficking. Note that all are within a narrow genre, none particularly appealing to yours truly. On the other hand, you get London, fashion, dancing, and music of the ’60’s. And, fresh off her tour de force performance in The Queen’s Gambit, you get the seductiveness of Anya Taylor-Joy. Speaking of seduction, who was better in the 60’s than Diana Rigg as Emma Peel in The Avengers? This was her final film before her death in September 2020. As Ellie’s landlady, she is as delightful, and surprising, as ever.

As you read some of the promos for Last Night in Soho, they inform you that a young fashion designer is transported back to the ’60’s in the body of an iconic singer. That is incorrect. In some fantastic photography, Ellie’s visions do take her back to “meet” Sandie, more dancer than singer. But, rather than “in the body,” the encounters are more mirror images (see pictures above). Yet, as wonderful the acting, gorgeous the scenery, and delightful the dance, the story bewilders. That may well be the intention, but 90% through, I was certain that I’d have to read articles entitled “The Last Night in Soho explained.” Both good and bad, I give the movie 3.5 Gavels and it receives a 74% Rotten Tomatoes rating with an equally solid 7.5/10 IMDb score.

An aficionado of the 60’s, admirer of Audrey Hepburn, Ellie wants noting more than to attend the London School of Fashion. Her roommate something of a stuck-up bully, Ellie seeks lodging from the elderly Ms. Collins, who insists no boys in her room after 8:00PM. Something about that room takes Ellie back where she follows the glamorous life of Sandie. Except, she soon finds that Sandie’s life is not all that glamorous. Why can’t Ellie remain in the present? What keeps drawing her back? What did happen to Sandie?

“Dashed dreams” sums up Sandie, played by Anya Taylor-Joy. While we uncover her past, it is Ellie that takes us on the journey. Thomasin McKenzie excels in that role as she did recently in films such as Leave No Trace and The King. While on the subject of the ’60’s, Mrs. TMJ recognized the name Rita Tushingham from Dr. Zhivago. Now, she’s old enough to be Ellie’s grandmother. Other actors of note include Terence Stamp as a lecherous old man and Matt Smith (The Crown) as a manager/pimp.

Would I recommend Last Night in Soho? If you like the genre, I’d still wait for it to be streamed. It’s certainly not worth a $10 ticket. Then, as a trip down memory lane, along with blood and gore, go for it.

“Soho is one hell of a half of a movie: a wildly styled neon reverie whose spooky bedazzlement only crashes to earth when it succumbs to bog-standard horror in the final act.” Entertainment Weekly

‘It’s swellegantly directed but pads out the scream time before an effective twist. Viewers who were there can revel in the soundtrack (Cilla Black, Petula Clark, The Kinks) and appearances by ’60s legends.” AARP Movies for Grownups

It turns out the Last Night in Soho is several nights. A few less would suit me just fine.