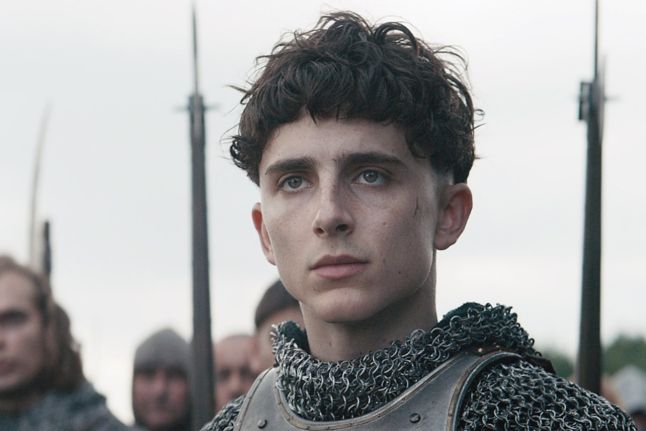 Lest we forget, Shakespeare spins a magnificent yarn. As reported in Thursday Morning Coffee, The King follows his plays about King Henry V, which are not all that accurate historically. See Refinery 29. So, perhaps Hal wasn’t such a reluctant warrior after all.

We all know that the victors get to write history. In this case, Joel Edgerton is one of the writers. Is it any wonder that his part as trusted friend and warrior is really fictional? If I’m going to write myself in a movie, certainly I want to be a heroic figure. It appears that old Bill is not the only only one to spin some wool. Nevertheless, this is a fine flick, with treachery, manipulation, sieges with trebuchets, battle tactics, and, oh yes, a beheading. After all, this is the Middle Ages. I give The King 3.5 Gavels and it receives a 71% rotten Tomatoes rating with a solid 84% Audience score.

In the early 15th century, an ailing King Henry IV is fighting the Scots and the Welsh. He chooses his second son, Thomas, to succeed him as Hal is quite the boozer. When Thomas dies in battle, certain members of the Court are certain that Hal is too weak to be king. A conspiracy with King Charles VI of France leads to war. But, new King Henry V trusts none of his advisers. He turns to fellow hell-raiser, Sir John Falstaff, to lead the soldiers. More importantly, why is The Archbishop financing this foray into France?

Timothee Chalamet has come a long way since being a rejected suitor in Little Women. Here, he gets to be King. This is Joel Edgerton‘s (Sir john Falstaff) best work since Loving, but then as I said, it should be. The scene stealer is Robert Pattinson as the Dauphin, the heir to the French throne. Except for floundering in the mud, he hams it up quite nicely. Actors love being the bad guy!

Truthfully, I enjoyed learning more about King Henry V and his exploits at the Siege of Harfleur and the Battle at Agincourt. Chief Justice William Gascoigne tells Hal that “victories unite a country” and it seems that is so in this case. As noted by Hal’s sister, Queen Philippa of Denmark, palace intrigue seems to be everywhere. Or, as Falstaff points out,”a king has no friends, only followers and foes.” One wag writes that The King is “full of sound and fury, signifying nothing.” I disagree. Check this one out on Netflix.