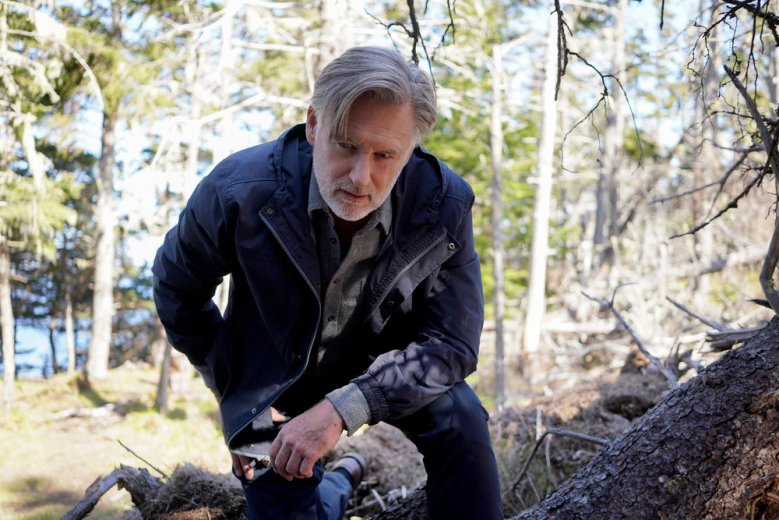 Does The Sinner 4 put this series back on track? After an outstanding The Sinner, and a dissatisfying The Sinner 3, has Executive Producer Jessica Biel pulled this one back from the brink? Continuing its line of superb guest actors from Biel to Tracy Letts and then Matt Bomer, The Sinner 4 gives us Frances Fisher. Harry Ambrose might be 6’2,” but all 5’4″ of her Meg Muldoon intimidates the locals. Who are the locals? After 40 years of detective work, Harry retired almost one year ago. Now, with his new girlfriend from Season 3, artist Sonya Barzel, the couple vacation in Clark’s Harbor, Nova Scotia. In my next life, I’d like to be the guy who gets to scout out the beautiful film locations.

The Sinner 4 began its eight episode run on the USA Network on Wednesdays starting October 13th. Running weekly through December 1st, this version of “the whydunnit” shows promise. After Jamie Burns tried to bury Ambrose alive, Harry earned a much need break from serial killers. Why not visit Herring Cove for “the best sunsets on the island?” Still, Harry being Harry, he seems to find troubled souls wherever he goes. Why should Nova Scotia be any different? And, clues seem to indicate that someone has control over Percy Muldoon. Percy is the “golden child” of the most influential family in Clark’s Harbor, and the granddaughter of matriarch Meg Muldoon. Is she dead or missing? Briefly into its new season, I give the show 4.0 Gavels and it receives an excellent 8.3/10 IMDb score.

Shortly after his disembarkation at Clark’s Harbor, Harry needs to get away from the crowds. At the only quiet spot on the island, he meets a thoughtful Percy Muldoon. “Has the ocean spoken to you yet,” she inquires. “She’s in a mood today.” Unable to sleep, a few hours later, he follows a distraught Percy to a cliff. In the darkness, he’s certain she jumped. A 911 call brings Police Chief Lou Raskin, a man totally out of his depth. Unable to find a body, Meg Muldoon thinks Harry is some sort of quack, or worse. Soon, she will apologize. Secrets abound in the paradise of Clark’s Harbor.

To a certain extent Bill Pullman is to The Sinner 4 what Jason Sudeikis is to Ted Lasso. Both, somewhat unexpectedly, created unforgettable characters. Harry’s halting cadence is initially annoying, only to become nearly endearing. Former nude artist, Sonya Barzel (Jessica Hecht) is no longer interested in the human form after her narrow escape from the clutches of Jamie Burns. She notes that the creepy and weird facts of the missing Percy Muldoon have Harry “energized and alive.”

“Whatever you think it is, you’re probably wrong. I could be anywhere. Please find me.” So says Percy to either a hallucinating or clairvoyant Harry Ambrose. With The Sinner 4, one can never be quite sure.

“Add on a thin veneer of mysticism and you have a missing persons story that isn’t revolutionary, but one that throws off convention by just enough degrees to make it worth checking out.” IndieWire

“If the theatrics of Season 3 turned you away, Season 4 will bring the mystery lovers of the first seasons back.” Paste Magazine

In Clark’s Harbor, females who fish prefer to be known as “girl fishermen.” Apparently, we are about to see a “racism-fueled fishing war, secret drug addictions, and a hidden lunar witch coven that basks naked in the woods.” And, off we go!