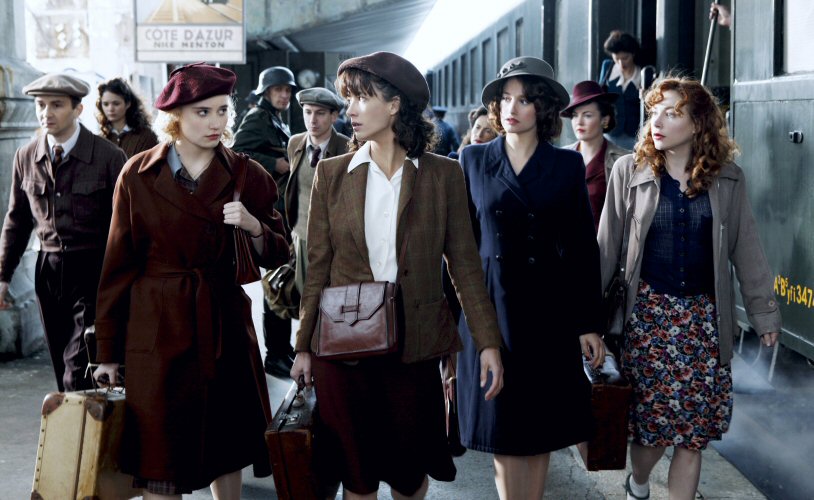 A Call To Spy is more truthful; Female Agents is better drama. The latter is based upon the exploits of Lise de Baissac Villameur and Violet Szabo, though neither killed the fictional Standartenfuhrer Karl Heindrich. It is true that the SOE-Special Operation Executive had a French division and used women to spy. Even by film standards, putting a group together in four days, training for one day, and then jumping into Occupied France seems a stretch. But, like her namesake, Marcel Marceau, in Resistance, Sophie Marceau, as Louise Desfontaines, pulls off the impossible. For her exploits, Villamuer (referred to as Desfontaines in the film) receives the Croix de Guerre and Legion d’Honneur. Consider Female Agents a tribute to all those women who bravely fought the Nazis in WWII.

Found on Amazon Prime, Female Agents brings the horrors of war to life throughout its 2 hours and 28 minutes. It never stints on barbaric Nazi interrogation practices, even on the females. Expect executions and graphic nudity. Also, watch five women navigate in hostile territory able to quickly pivot as needed. Louise, leader and sniper, watched her husband die just a few months earlier. Jeanne, a prostitute, selected solely because she killed her pimp. Gaelle is a chemist and explosives expert. Suzy, a cabaret dancer, was engaged to marry Heindrich. Finally, Maria, an Italian Jew, operates the radio. Sent to France on one mission, the SOE demands a second. Can Louise even trust her brother, Pierre? For the viewer to enjoy the action, the bargain is French subtitles. I give Female Agents 4.0 Gavels and it receives a 78% Rotten Tomatoes rating with a 6.8/10 IMDb score.

A geologist, sent to examine soil samples on the Normandy beach, is in a French hospital. Heindrich, local commander of the SS, suspects the D-Day landing will be at Normandy but needs evidence to present to Rommel. It is imperative that the SOE get the geologist out of France before the SS learns his true identity. Five women receive the orders to get him out. Heindrich arrives before they do. Little goes as planned.

From Braveheart to The World is Not Enough, Sophie Marceau is an international star. Only 41 at the release of this film in 2008, she carries it with her steely determination. Her father, Gerard Depardieu, is much more famous, but Julie Depardieu (Jeanne) has three Cesar Awards (highest French film honor) of her own. You might remember Moritz Bleibtreu from Brad Pitt’s World War Z. Is his Heindrich conflicted about torture? Or doth he protest too much?

One publication proclaims that the women are too pretty in Female Agents (Sydney Morning Herald). Pictured below, those gals compare very well. Each agent gets instructions that they must hold out under torture for at least 48 hours to give their compatriots time to escape. Easier said than done.

“A war thriller in classic style, with superb central performances which help Female Agents rise above the awful title and keep you hooked from start to gripping finish.” Empire Magazine

For movie-makers, WWII yields plenty of stories, even if they stretch the truth here and there. If you like the genre, this one should satisfy.