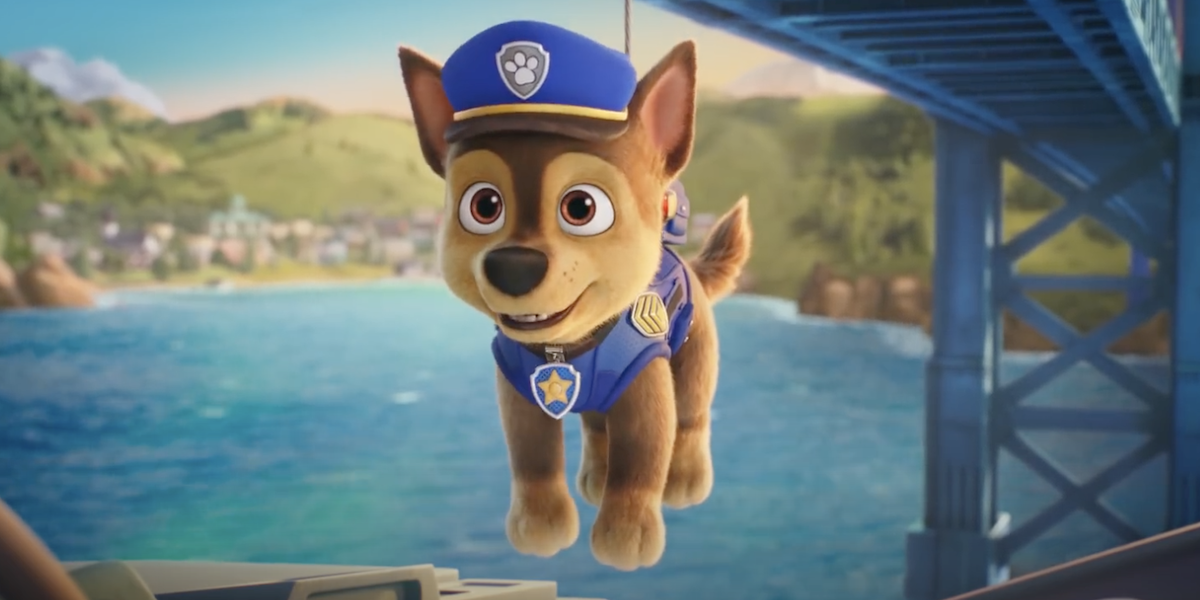 Never having watched Nickelodeon nor Paw Patrol, I am unclear if I just saw a 90 minute toy commercial or a creative children’s film. For the uninitiated like me, Paw Patrol just concluded its eighth season on the aforementioned channel. Not only does the show receive a boatload of awards, it also sells hundreds of millions of dollars of toys each year. Since the characters received some significant “redesign” in the film, I will guess that so did their vehicles. Never fear. The costumes will be ready by Halloween and the toys will be ready for Christmas.

Were we the only folks over 40 at our showing of Paw Patrol: The Movie? Probably. In a first, you will find an asterisk after the Gavel rating. Clearly, this is a movie for the very young and I’m sure they will enjoy it immensely. For the adults, the first half is slow although it picks up a bit at the end. Kids will love the color and animation. However, Mayor Humdinger becomes annoying to all pretty darn quickly. He’s been a nemesis to the Paw Patrol for a long time. For the kids, I give the film 4.0 Gavels; for the adults, it gets a 3.0 Gavel rating, thus the asterisk. It corrals an 86% Rotten Tomatoes rating and an early 6.4/10 IMDb score.

After Humdinger becomes Mayor of Adventure City, Liberty makes a call for help to the Paw Patrol. Dogs go missing as cats are Humdinger’s preferred pets. Ryder loads the puppies into the bus and they head for their new headquarters in the city. Before long, the skills of each puppy are needed to put out fires, rescue subway passengers, and stop a weather machine gone awry. As Ryder is wont to say “Paw Patrol, let’s roll.”

The lead puppy is Chase who is having a self-confidence crisis. He is voiced by Iain Armitage who also happens to be Young Sheldon. Ron Pardo is the voice of the Mayor. He gets mention because he grew up in Pardoville, Ontario. Apparently the town is named after his ancestors. Other voices of note are Tyler Perry, Kim Kardashian, Dax Shepard, and Jimmy Kimmel (Boss Baby: Family Business). Some wags might say he is typecast as Marty Muckraker.

Okay, the puppies are cute. The cats get no lines. Paw Patrol definitely discriminates against cats. Liberty is a new character to the series, a Paw Patrol wannabe. Notably, the experts expect this movie to gross $7-9 million this weekend while The Protege projects only at $5 million.

“A better movie than it needs to be, with some neat visuals, an outstanding score and a story that, while simple, is well told.” Washington Post

“Any crass consumerism is eclipsed by disarming, demonstrable themes and meaningful sentiments woven throughout the film’s textured fabric.” Variety

“The film version feels most energized when it’s amping up to sell toys: fetishizing the clicking of plastic into plastic, and supersizing the characters’ armor and vehicles with a deranged zeal . . . ” (AV Club) That part reminds the viewer of Tony Stark putting on his Iron Man gear. Maybe Spin Master Entertainment is trying to work a crossover deal with Marvel Comics.