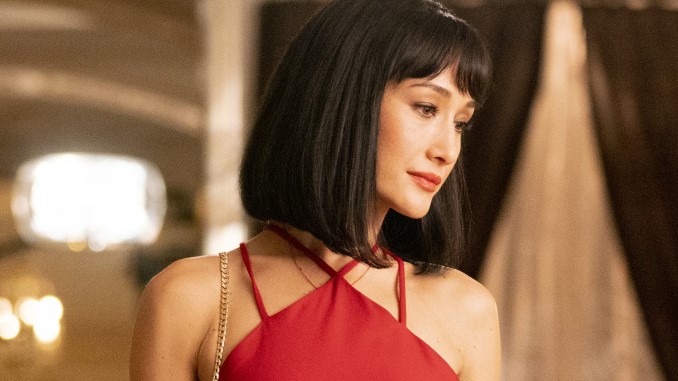 The hubris of Hollywood is on full display in The Protege. Another 70 year old male gets to be an action anti-hero and bed the stunning 30 year old female action heroine. (Actually he’s 69 and she’s 42, but you get the point.) Move over, John Wick. Out of the way, Atomic Blonde. There’s a new girl in town. Maggie Q as Anna Dutton doesn’t just kick butt and take names. She eliminates. And, not since he was Batman has Michael Keaton looked this young and buff. Either he discovered the Fountain of Youth or there is an early candidate for Best Make-Up. Whatever the case, he steals the second half of the film.

The Protege begins in 1991 in Da Nang, Vietnam. Then, it jumps thirty years to Bucharest, London, and back to Nam. From the Dragon Bridge in Da Nang (see below) to a brief glimpse of the limestone islands, Vietnam comes off looking well. But, from the studio that gave you John Wick, the audience expects action. The Protege fills that craving with a much better story. Granted, the film does go a tad overboard with some gratuitous gore, but about what you expect in a movie of this ilk. Some of the “surprises” are predictable, but some will likely startle. All in all, The Protege entertains. I give the flick 4.0 Gavels and it receives a 81% Rotten Tomatoes rating.

Rescuing Anna from Da Nang as a young child, Moody Dutton trains her to join the family business, i.e., the business of assassination. Quite proficient at finding the hidden and killing the well-protected, they are compensated commensurately with their well-to-do lifestyle. Moody asks Anna to help find someone from his past. Suddenly, all those who assist the task end up dead, including Moody. Vowing never to return to the place of her parents’ murder, Vietnam holds the only clues. Return, she must.

With her mother a Vietnamese immigrant, casting Maggie Q was a no-brainer. Starring in Mission: Impossible III and Nikita, she knows action. One assumes Samuel L. Jackson (Moody Dutton) gets lots of screen time. Getting killed off early tends to dampen the accolades. Even Robert Patrick (T-1000 in Terminator 2) gets more facetime as the leader of a biker gang. Still, it is Michael Keaton who stands out as Rembrandt. Of the bad guy/really bad guy/evil guy trio, he’s only the bad guy, but a delicious one at that.

Even if you don’t go to the theater to see The Protege, I recommend that you put it on your to-do streaming list. It’s certainly worth a popcorn-on-the-couch night. The Protege is definitely not the mindless, continuous bloodbath of a John Wick film.

“It’s Keaton’s show, and he kicks The Protégé up a notch and shows why in a world of students, he’s a teacher.” Detroit News

“An entertaining action flick, with a strong cast and some nifty sequences. Maggie Q is a total badass!” CineXpress

In my not-so-humble opinion, this one deserves a sequel. It may take lots of word-of-mouth to get it done. Here’s my start.