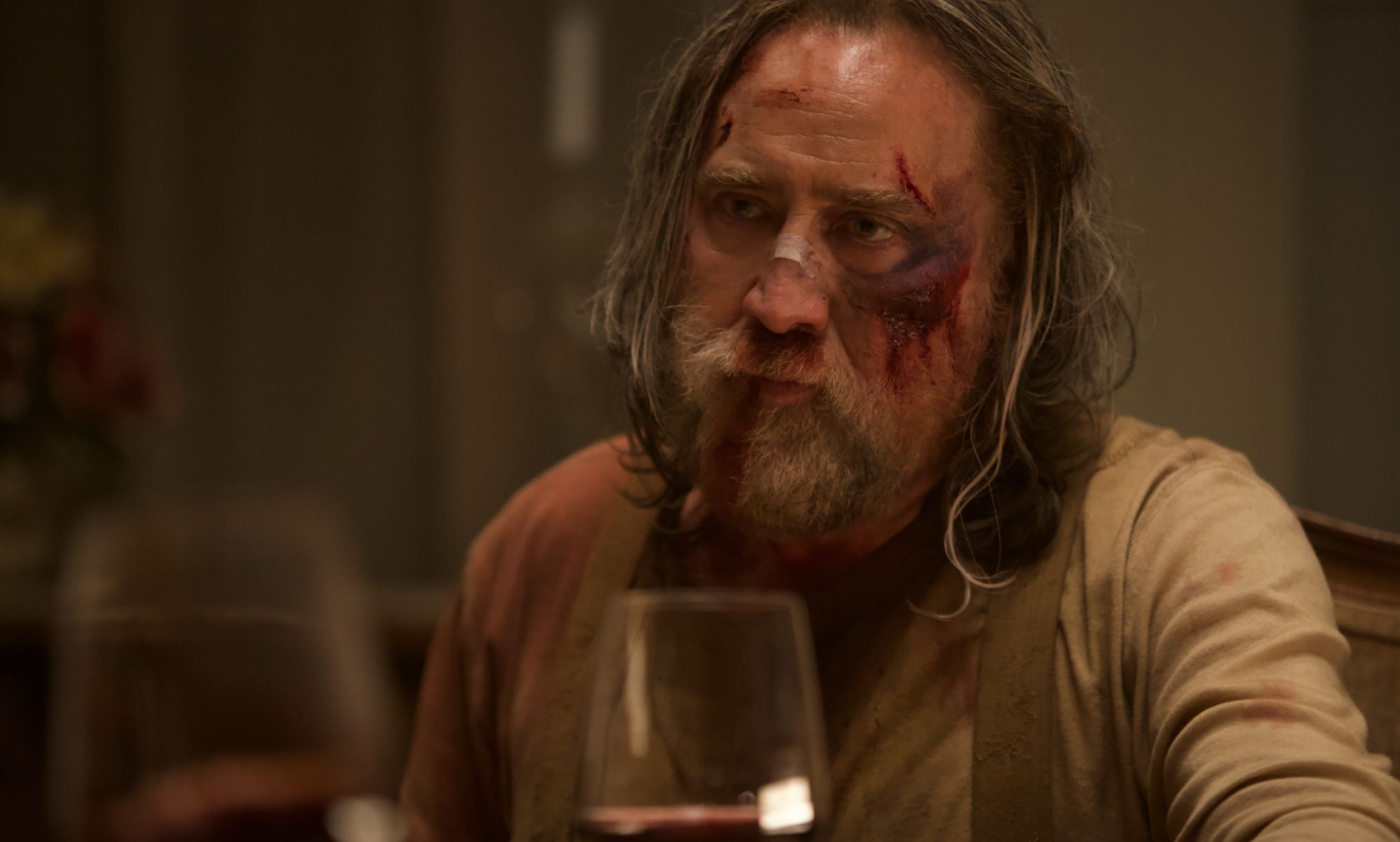 Pig is the truism that you can’t make a silk purse out of a sow’s ear. Take a concept no one will believe, film it in the darkness, and have a plot that barely connects the characters, then call it art. The critics will eat it up like the proverbial pigs eat slop. They call this the best Nicholas Cage performance in years. How would they know? Ninety of the ninety-two minutes he’s in darkness or heavily shaded. Don’t believe me? Look at these pictures. They are typical of the film. Even the grand Oregon forests get short shrift in Pig.

Rob Feld was once the toast of Portland. He was somebody. As a celebrated chef, he was responsible for half the successful restaurants in town. Then, fifteen years ago, his wife died and he disappeared. His legend lives on, even though most think he’s dead. The viewer eventually meets a few of his former employees, but the tie-in is minimal. Overall, this unfulfilling glimpse into his past is frustrating in the extreme. Why are we watching this gloomy film if not to find out why he abandoned society for a shack in the woods? Not since Batman vs Superman has the world been enveloped in such darkness. Really, this film needed more Pig. I give the film 2.0 Gavels and it receives a 97% Rotten Tomatoes rating with a 7.0/10 IMDb score.

Rob exists in the Oregon wilds trading truffles to Amir in exchange for food and other needed items. Pig is Rob’s only companion. Seemingly, the pig grunts to Amir more than Rob. Then, one night, thugs beat up Rob and steal Pig. To keep his truffle supply going, Amir reluctantly agrees to Rob in locating the stolen animal. The trail takes them to Portland and Rob’s past. Some are not happy to see him.

Actually, Nicholas Cage (The Croods) makes a fine Rob. There’s no range needed as the character is always morose. Alex Wolff (Bad Education, Jumanji 2) plays Amir. He’s very believable as he looks as confused as the audience. Adam Arkin is Amir’s father for whom Rob once cooked a meal. Did I miss something?

Prepared to be underwhelmed after reading the synopsis, Pig met expectations. Maybe that’s all there is. Some dude, despondent, spends the next fifteen years in the woods as a recluse. What’s all the hype?

“The character that Cage portrays is incoherent, illustrative, and ludicrous, and yet his portrayal makes the movie.” New Yorker

“Pig doesn’t give viewers much to care about, other than perhaps the title character. Sarnoski’s film is undercooked.” Salon.com

Did the critics like this film because Cage was so much better-than-expected? Granted, he was, but the movie ain’t worth the cost of bacon, let alone popcorn at the theater.