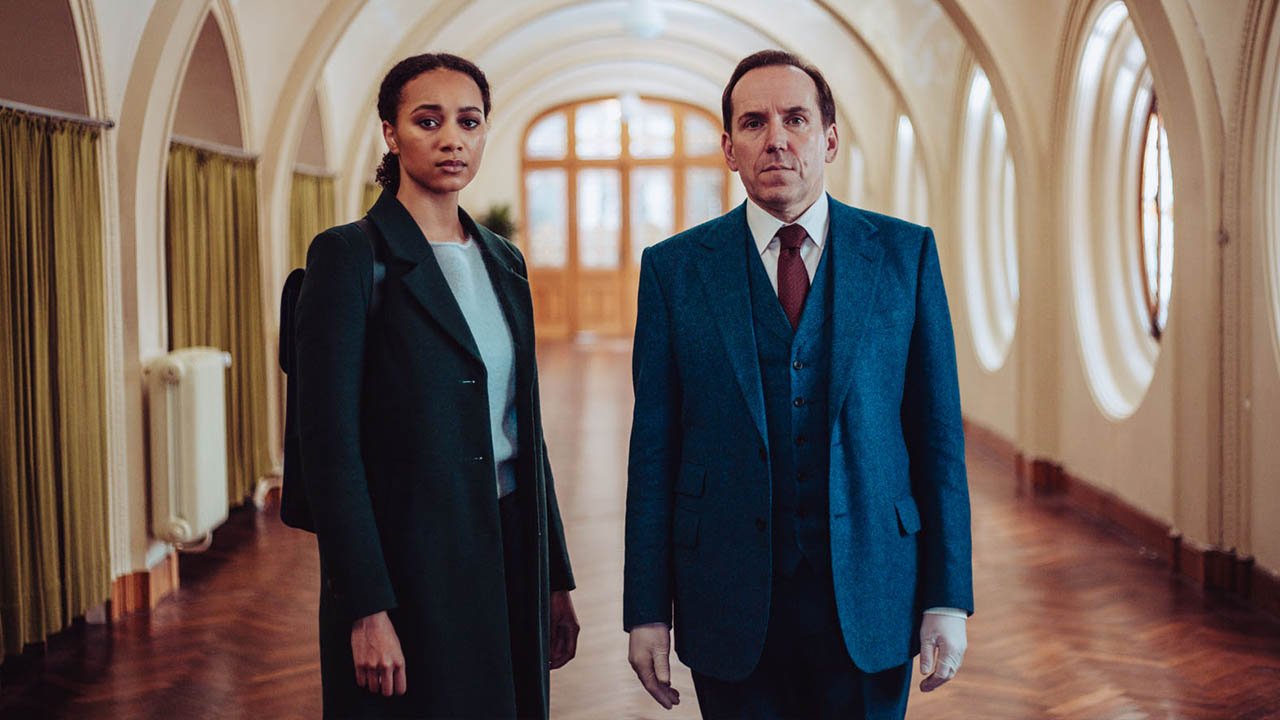 If imitation is the sincerest from of flattery, why not remake the successful Belgian series, Professor T (8.0/10 IMDb)? Surprisingly, the English version receives little notice in the American press so far. Here, Masterpiece and PBS bring us another delightfully obsessed character who will immediately bring back memories of Monk. (Note: That show lasted eight seasons and won eight Emmys.) In this case, the “somewhat odd” Jasper Tempest reminds us “I don’t catch scumbags, I study them.” As one of the pictures below shows, he doesn’t like to get his hands dirty. Hand sanitizer everywhere, he doesn’t like anything dirty.

The meticulous, precise Professor T teaches at Cambridge. Any early scene with the Dean indicates Professor T is not one particularly concerned about political correctness. His apartment is close to the old family home, now abandoned and up for sale. The first episode provides the clue as to his dread as passes the structure daily.

But, the key to this six-part series is a former student, now a detective. She wants Professor T to consult on a rape case that she believes may involve a serial rapist. Detective Inspector Paul Rabbit, her immediate supervisor, thinks the professor is some kind of kook. His superior, DCI Christine Brand, apparently has some history with Jasper and warns him, “no games, share information, and get permission before any interviews.” Jasper does not suffer fools easily and rules are made to be broken. I give Professor T 4.0 Gavels and it receives an early 6.8/10 IMDb score.

Diana Tyson returns to her Cambridge dorm after dark to some Halloween-type revelry. A masked man rapes her and Diana remembers little of the incident. When she discloses the rapist took her necklace, DS Lisa Donckers remembers a similar rape five years earlier of a fellow student. Donckers still feels the guilt as she allowed Saskia Dawson to return to the dorm alone rather than accompanying her. With little to go on, Donckers reaches out to her former professor of Forensic Criminology. He declines, but both fear another attack will soon occur. Their fears are soon confirmed.

Ben Miller (Bridgerton, Paddington 2) is another of the ubiquitous British actors seen over and over although you may not know their names. Reportedly, the part of Professor T comes somewhat easier for him as he suffered from OCD earlier in his own life. Memorable is an early scene in his classroom as he teaches the fallibility of witness identification. Also seen in Bridgerton, Emma Naomi plays DS Donckers. Her down-to-earth earnestness is a nice contrast to the professor.

The original Professor T is available on Amazon Prime. Just to confuse you, there is also a German re-make. The relationship between Jasper and his mother, Adelaide, looks complex and promising. Will Jasper’s students be anything other than a “flock of gutless chickens?” Will Jasper and Rabbit be able to co-exist? Did Brand and Jasper share a romantic interlude? There’s a lot yet to cover in this series.

“Miller is adept at making Tempest into a character that’s wholly different than Tony Shalhoub’s Adrian Monk, if only because Tempest isn’t just a man of routines. His teachings about forensics and criminology feed directly into the cases he’ll help Donckers and the Cambridge police solve.” Decider

“The British remake is excellent; the original is stunning.” The Doctor Who Companion

Pick your poison, excellent or stunning. Either way, you can’t go wrong. Our duo solves the first case rather perfunctorily. Since the characters are now established, I expect that will change.