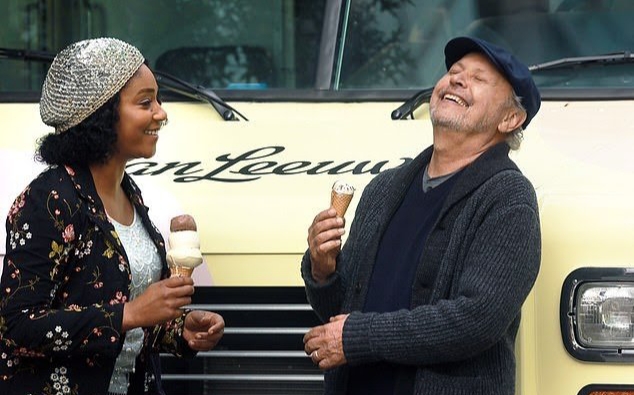 Here Today is a bittersweet, rollercoaster ride of regret and forgiveness. Wildly inconsistent, at times it can be one of the best movies you will see so far this year. Then, at other times, it regresses into SNL-type skits that really don’t tie into the theme. Still, as a film about a man entering early stages of dementia, the comedy and drama are first-rate. As an odd couple, Emma and Charlie are eminently watchable, but are they believable? Would not Emma be Here Today and gone tomorrow? Nevertheless, if you like Billy Crystal, put this one on your to-do list. He puts on an acting clinic.

Filmed in New York, Here Today follows Charlie as he keeps his diagnosis secret from co-workers and family. Years of success as a comedy writer earn him respect, but most of the younger writers think his time is long past. A lunch intended for another brings Emma and Charlie together, nothing in common. Their first “date” ends up at an emergency room, she without insurance. Street singer Emma promises to pay back every penny. As their friendship grows, she notices his issues with forgetfulness overlooked by everyone else. Why won’t he tell his family? More importantly to the viewer, why do the critics put Here Today at a 46% rating on Rotten Tomatoes but the Audience score sits at 93%? I give the movie 3.5 Gavels.

Charlie met his wife on the shores of the Atlantic. It’s safe to say it was love at first sight. So in love, how did Charlie become nearly estranged from his two kids? Years later, they believe it is work that makes him an untrustworthy event attender. But, Charlie needs to write down his memories before “the words run out.” Just what is it about Emma that seems to inspire him? Is she just another younger woman fling for him? Are his outbursts fits of genius, or symptoms of something else?

Billy Crystal and Tiffany Haddish (Like A Boss) provide an interesting dynamic, “old man” Charlie and sassy Emma. Even they cannot describe their “relationship.” Ultimately, Charlie finds his family and Emma appears to be left out. It’s as if the writers didn’t exactly know how to deal with her, either. In flashbacks, Louisa Krause (Dark Waters) provides a compelling deceased spouse, Carrie.

The final twenty minutes of Here Today will likely bring a tear to the eye. Love left unexpressed, hugs not given, and moments not lived, are a specter in Charlie’s life. The film will make you call a loved one. Yet, Here Today also knows that families can always mend.

“Here Today is a weird case – not mediocre, not lukewarm, but genuinely bad and good, cringe-worthy and moving. Take this as a recommendation, and a warning.” San Francisco Chronicle.

“Here Today, as good as some of it is, is a watchable movie with a soft center. But it makes you glad to see Billy Crystal take center stage again.” Variety

I’d recommend you wait until this one is streamed. It’s well worth the view, but not at theater prices.