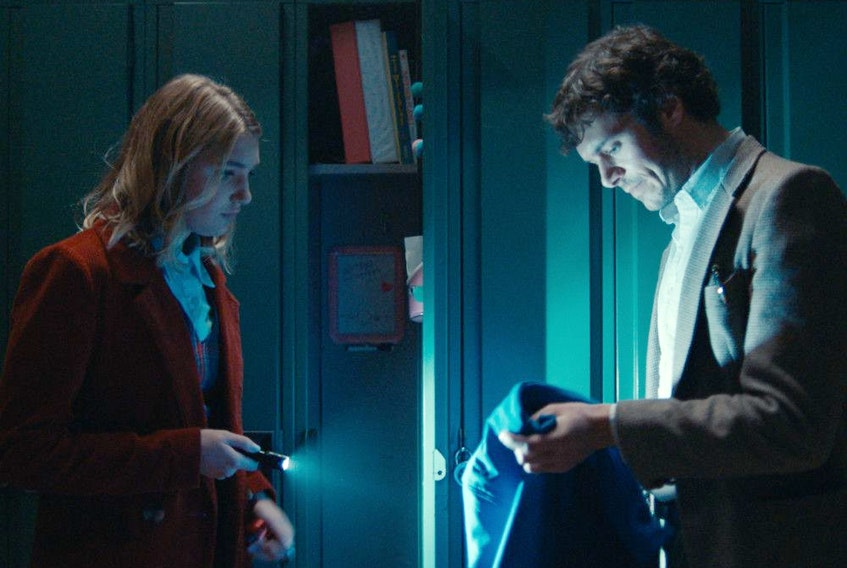 Like Minari, I keep thinking I’m missing something in The Kid Detective, featured on Starz. At an 84% Rotten Tomatoes rating, the critics loved it. A 7.0/10 IMDb score is pretty good. So, why can’t I get into it? From our Canadian neighbors to the north, the premise seems solid. As a twelve year old, Abe Applebaum is a star mystery-solver. He closes so many minor cases that a bad guy burns down his treehouse office. His big case caught Rory Beane, “the neighborhood knucklehead,” as the thief of school funds. The town is so grateful they set him up in a downtown office. His secretary is none other than the Mayor’s daughter, fourteen year old Gracie Gulliver. So cute, Abe pays her in soda pop.

For those who remember her, The Kid Detective opens with a Nancy Sinatra favorite “Sugartown.” This is small town U.S.A., rather Canada. Even Constable Cleary consults with Abe. And, all is well, until someone kidnaps the lovely Gracie. The townsfolk are certain that Abe will find her. As time goes by, the pressure mounts on this young boy. Sound good so far? And then, the film falls into a slow funk. Watching the thirty-two year old former town favorite drinking, taking drugs, and urinating is not my idea of a good time. Breaking into houses and a school, and hiding in closets seem to be The Kid Detective‘s modus operandi. Abe’s parents worry about him. I worry about the movie. I give The Kid Detective 3.0 Gavels.

Some twenty years after the kidnapping of Gracie Gulliver, Abe is no longer the town’s Golden Boy. Abe is a mess, physically and mentally. Then, sixteen year old Caroline asks Abe to investigate the death of her boyfriend, Patrick Chang, stabbed some seventeen times. “Everybody has secrets. I want you to be prepared,” Abe tells Caroline. Chang was different, she assures him. He put origami in my locker. Can this has-been really solve a murder? “It’s difficult to accept who you are in your head compared to who you are in the world.”

Seen in Promising Young Woman, Adam Brody is the depressed former kid detective, Abe. As I’ve made abundantly clear, I do not enjoy watching depressed folk moping around. The final scene is the icing on the cake. Sophie Nelisse (Close) looks a tad mature for a sixteen year old, but does a commendable job as the “innocent” Caroline. The remaining cast fit the very definition of caricatures.

In The Kid Detective, stay away from The Red Shoe Gang. Since the principal searches the lockers for drugs, the smart kids are under less suspicion. In other words, “the nerds become the new dealers.” One of the Asian kids, The Red Shoe Gang didn’t have to worry about Patrick Chang.

“There is some cleverness on display here, but the film’s ambitions are limited, to say the least, the territory extremely familiar, and the bright, spic-and-span settings quite the opposite of noir.” Deadline Hollywood Daily

“Laughter and enjoyment is stifled by the constant question of whether we’re allowed to laugh or enjoy anything at all.” New York Post

There are some nice twists here but the end telegraphed far too early. Overall, it’s a film noir without the noir.