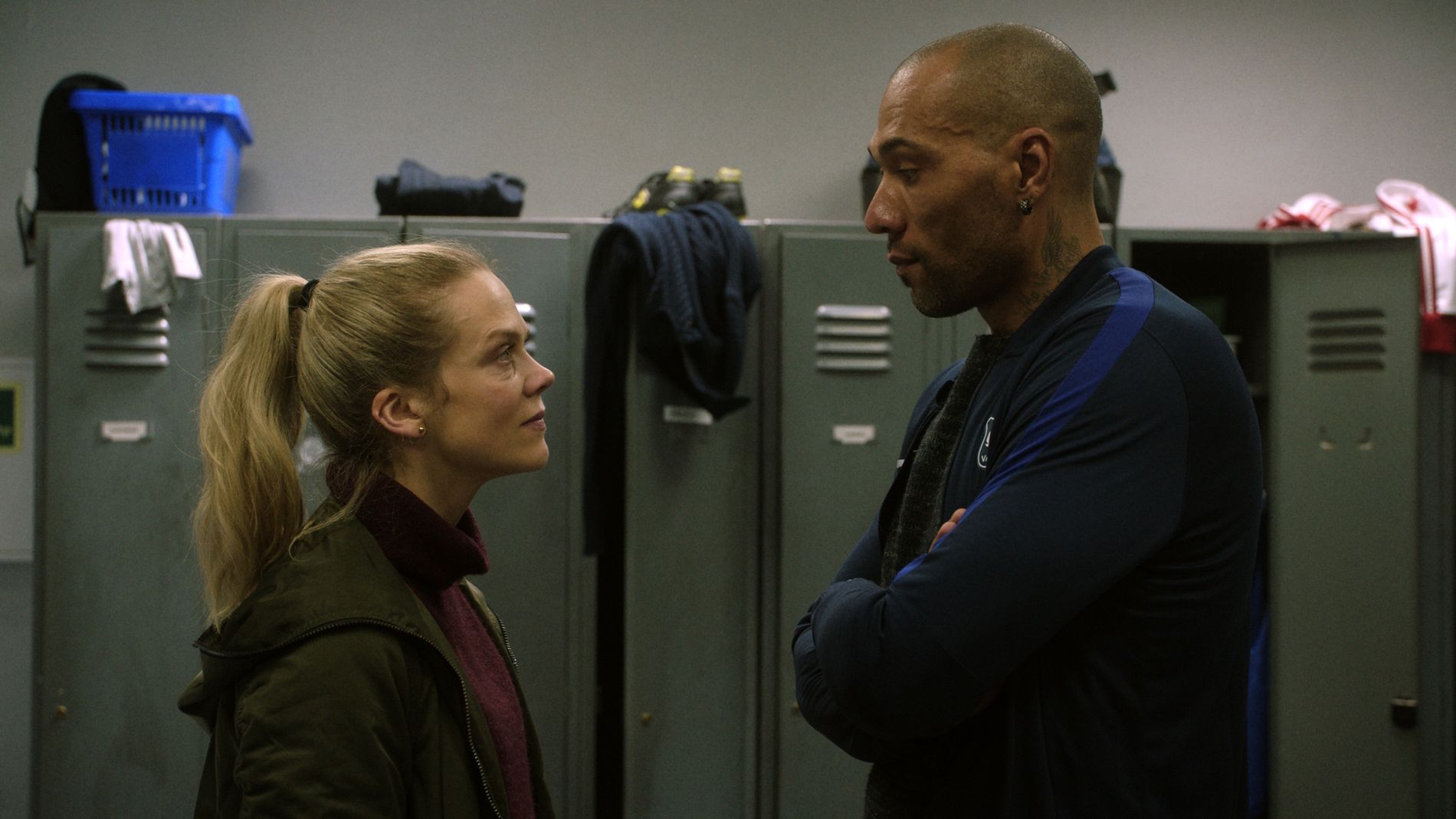 A friend recommended a Sir Alex Ferguson film; I found Home Ground instead. I didn’t have a Paramount subscription on Amazon but I did have Masterpiece. So, in effect, I traded an English Premier League documentary rated 8.5/10 IMDb for a Norwegian Eliteserien drama rated 8.0/10 IMDb. Not entirely equal, yet not a bad substitute, all things considered. And, after a nice sojourn with Atlantic Crossing and an even better historical Oslo, I felt pretty confident going into the ten episode Home Ground. Besides, imagine what it’s going to be like for the first female head coach in the NFL. Welcome to the life of Helena Mikkelson.

After fifteen years in lower divisions, Varg IL finally works its way back to Eliteserien. The head coach collapses from a heart attack 13 days prior to the opening match. The director, Espen Eide promises thirty-eight year old star player, Michael Ellingsen, that he gets the job even though he has no coaching experience. Espen now needs someone to assist with planning and tactics. As the coach of women’s teams that did well in the Champion’s League, Mikkelson fits the bill. Except, after fifteen years as head coach, she doesn’t intend to be the second on a team likely to struggle in its first year in Eliteserien. The fun is about to begin. Very well done, I give Home Ground 4.0 Gavels. Note: Season two consists of eight episodes.

Few think Helena Mikkelson will last more than three matches. She faces a rightly upset aging and injured star player, a hostile prime sponsor, a mutinous fan base, a skeptical team, and a daughter who must leave her boyfriend and her school. Her research leads her to the conclusion that drastic changes need be made. Her one hope is that she can convince wunderkind, eighteen year old Adrian Austnes, to join Varg. But, he quit Ajax one year earlier after only one match. Sexism is about to raise its ugly head in Ulsteinvik.

Although unfamiliar with Norwegian actors, Ane Dahl Torp fills the role of Helena Mikkelson. With three Best Actress film awards and two Best Actress TV awards, she obviously has the acting chops to carry the series. John Carew (Maleficent: Mistress of Evil) plays Michael Ellingsen, looming large over the shadow of Helena’s fate. Notably, Carew scored 38 goals in the Premier League, all but one for Aston Villa. Seemingly, only one person has Helena’s back. Of course, he hired her. Morten Svartviet (Beforeigners) acts as Espen Eide.

Home Ground pulls few punches as everyone tests Helena, most often face-to-face. She is always torn between whether it is best to fight back or to ignore the insult, or worse. Time and again, her foes underestimate her at their peril. Lest one thinks Home Ground is only about sexism in sports, considerable attention is given to the mental health of, and pressures on, Adrian. “All these years you’ve played for someone else. Maybe, it’s time you played for yourself.”

“I’m not interested in football at all, so for me it was crucial that this show had to be about something beyond football,” said producer Vilje Kathrine Hagen. “For me this show is about Helena and her journey into a world where only men are allowed. Football is a perfect arena to tell that story.” Variety

“Among all the division, the show develops a unifying element – the power of sport to bind a community, to make people feel like they are part of and belong to something. The Varg IL team song is also the rousing theme song of the series and is used to great effect more than once as it becomes more familiar, and in turn, more emotionally charged with each episode.” SBS.com.au

Ulsteinvik is a town that sits on the edge of the Atlantic Ocean. In addition to some fine drama, you will enjoy some stunning photography of the Norwegian country. The downside is you also have to put up with subtitles.