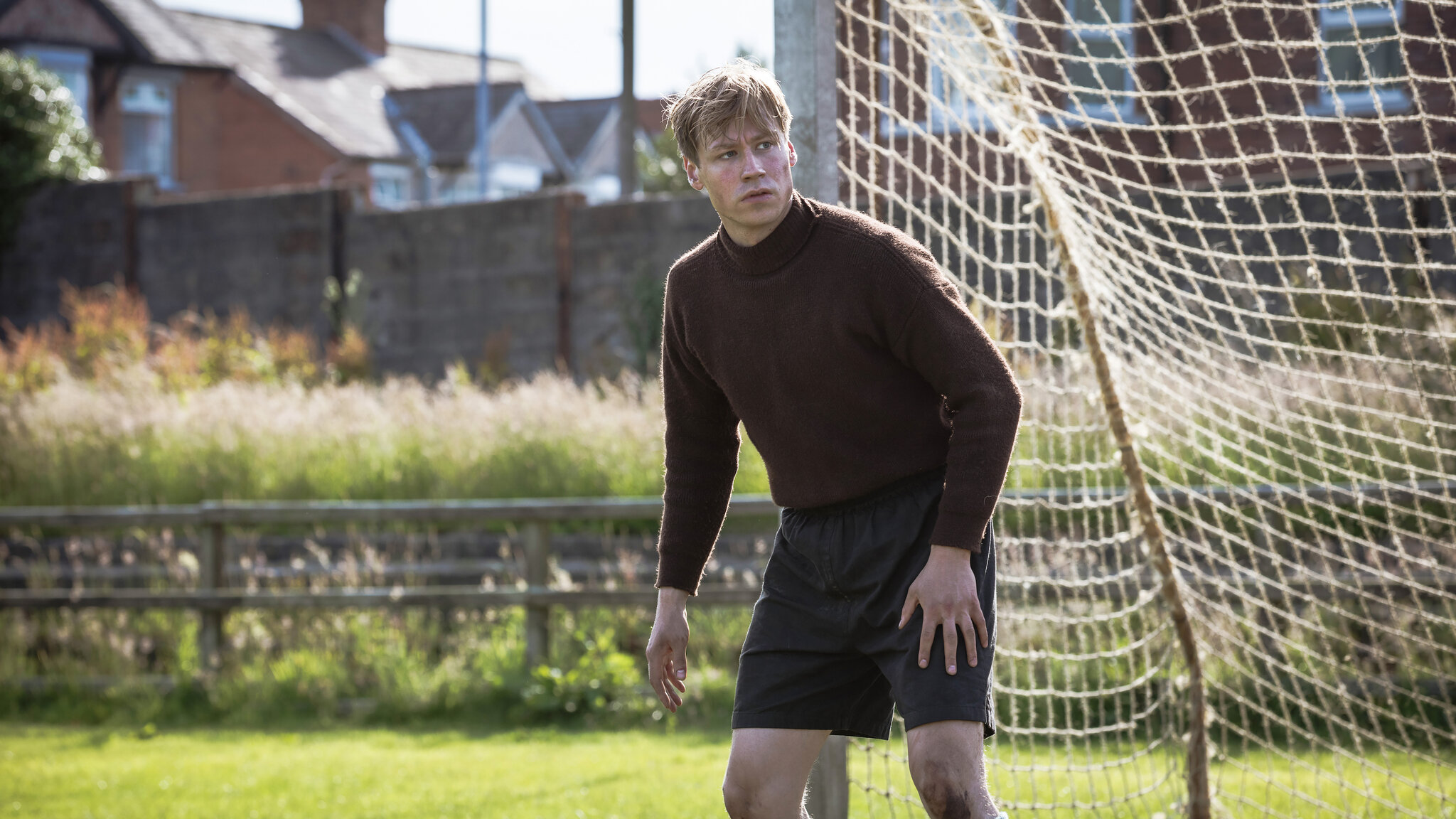 The Sydney Morning Herald describes The Keeper as a “morally flexible” movie. Who really was Bert Trautman? Was he an ardent Nazi sympathizer, or a soldier just doing his duty? Would the Manchester City fans have accepted him so quickly but for his goalkeeper’s abilities? Sports figures’ faults do tend to get glossed over. Or, four years after WWII, was it finally time to, not forget, but heal and forgive? Rabbi Altman thought so. Still, from German POW to the first foreign player voted English Player of the year is quite a leap. For those of us not steeped in English soccer lore, The Keeper is an Interesting tale, even if not particularly well-done.

Captured at the end of the war, The Keeper fails to provide much background on Trautman. He claims to be haunted by a Jewish boy he didn’t save, but how did he earn his Iron Cross, manage three escapes, and learn impeccable English? Why did he refuse repatriation? The film indicates that soccer and a girl had much to do with the decision, but his bio gives the impression that the decision was made earlier. In any case, I guess a love story is better for a sports drama, so who is going to complain. Margaret Friar plays a pivotal role in Trautman’s ultimate acceptance by the Manchester fans. Overall, The Keeper is a nice story, but certainly not worthy of an 87% Rotten Tomatoes rating. I give the film 3.5 Gavels and it receives a 7.3/10 IMDb score.

Jack Friar manages the local St. Helens football club. His goalkeeper is more interested in playing the trumpet and drinking than goalkeeping. One more loss and it is relegation for Jack’s club. Delivering groceries to the Lancashire POW camp, he notices a penalty kick competition. To the consternation of his daughter, Margaret, and his team, he may have just found his goalkeeper. Within a year, Bert Trautman’s exploits capture the eye of the managers for Manchester City. Will the fans, many of whom are Jewish, and the media accept a former German soldier? Was signing him a mistake?

In 2008, a young David Kross appeared in The Reader opposite Kate Winslet. Now, he’s the handsome, athletic Bert Trautman. Opposite Kross is Freya Mavor as Margaret. She’s Daria Greenock in HBO’s Industry. They have nice chemistry. The instantly recognizable face belongs to Gary Lewis, playing Jock Thompson, manager of Manchester City. You will see him in Outlander, Billy Elliot and Gangs of New York.

The Keeper tries to simplify the complexity of emotions in two sentences. Margaret says “you killed my friends and robbed us of our youth.” To which Burt replies, “I’d rather have danced with you than stood on the battlefield, but I didn’t have a choice.” Neither sufficiently captures the nuances nor depth of the sentiment of the times. We also know that Bert continued play with a broken neck in the 1956 FA Cup final. Unexplained is how he played for anther seven years. Was there a continuing risk of paralysis?

“A number of omissions skew the full story, but a charming and often enlightening watch all the same.” Little White Lies

“Maybe the actual Trautmann was haunted by memories of a boy with a soccer ball he saw killed. But it’s likely that reality was less tidy.” The New York Times

Notably, The Keeper won 9 separate film festival awards. While not a great film, it’s worth your time, if only to learn and remember and ruminate.