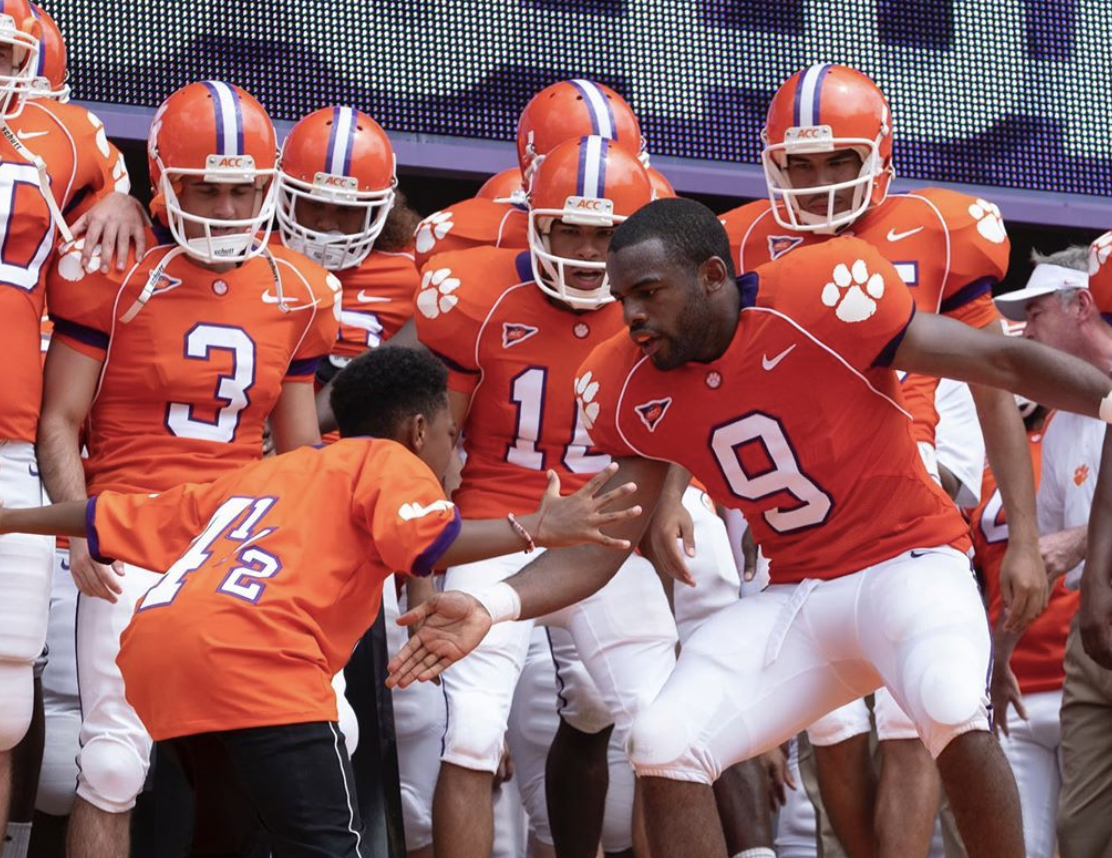 The NFL draft now complete, football addicts may want to try out Safety, a 2020 film on Disney+. Of course, football is its draw, but family and life are its raison d’etre. With a story so compelling that Oprah Winfrey featured Ray McElrathbey on her show, it’s no wonder that Disney picked it up. In truth, Ray was no football star at Clemson. His career consists of eight tackles in 12 total games. Yet, Ray is a star at life. For the true story, see History vs Hollywood. The inspirational version is moving and uplifting, as few do better than Disney.

In 2006, Clemson is not yet the powerhouse it will become under Dabo Swinney, but the orange and purple have a long and proud tradition. Ray, a projected Safety, gets a scholarship, renewable annually. Slip up in either football or in the classroom, and it all goes away. Unaware his mother is in jail for drug possession, Ray learns that his 11 year old brother lives with the local drug dealer. The choice is either foster care or take responsibility for his care. Except, the NCAA frowns upon athletes receiving assistance. Or, as Ray pleads, “don’t make me leave one family to take care of another.” I give Safety 3.5 Gavels and it receives an 80% Rotten Tomatoes rating with a 6.8/10 IMDb score.

With an overall record of 72-45 at Clemson, Tommy Bowden is not as famous as his father, Bobby Bowden, who went 304-97-4 at Florida State with two national championships. Still, the Bowden Bowl was a draw for a national audience. Into this mix, freshman Ray McElrathbey arrives on campus, ready to make his mark on Clemson football. Very soon, his brother will be living in his dorm room, trying to avoid the prying eye of Jimmy, the RA. Girlfriend Kaycee eventually convinces Ray to allow others to help. It is her article in The Tiger, the college newspaper, that catches the eye of the NCAA. Nothing good comes from an NCAA investigation.

Some actors have charisma. Jay Reeves has charisma. As Ray, you just root for him to succeed. A fictional character, Kaycee Stone is the understanding girlfriend. The daughter of Jamie Foxx, Corrine Foxx , plays Kaycee. At age 27, Corinne is an executive producer of her dad’s much maligned Dad Stop Embarrassing Me! Matthew Glave should be comfortable standing in for Tommy Bowden. In First Man, he stood in for another well-known character, Chuck Yeager.

Safety is another example of a great story in which the writers feel the need to create more drama with unneeded characters. Neither Kaycee, nor roommate, Daniel Morelli, are real. I guess we needed a little romance and a few Italian jokes. Linebacker Keller comes off as the heavy early on, but his backstory might surprise.

“That McElrathbey’s life doesn’t fit the mold of your average inspiring sports movie is a good thing because it allows Safety to show that winning off the field is much more important than on.” Minneapolis Star Tribune

“Sometimes, it doesn’t matter if you know your buttons are being pushed, so long as they’re pushed well. Safety pushes them well enough.” The Maine Edge

The photo below shows the real Ray and Fay. SPOILER ALERT: Released from NCAA concerns, Clemson does right by these two until Ray graduates in just three years. Sadly, Clemson did not renew Ray’s scholarship for a fourth and final season. That tidbit leaves a sour taste in an otherwise edifying tale.