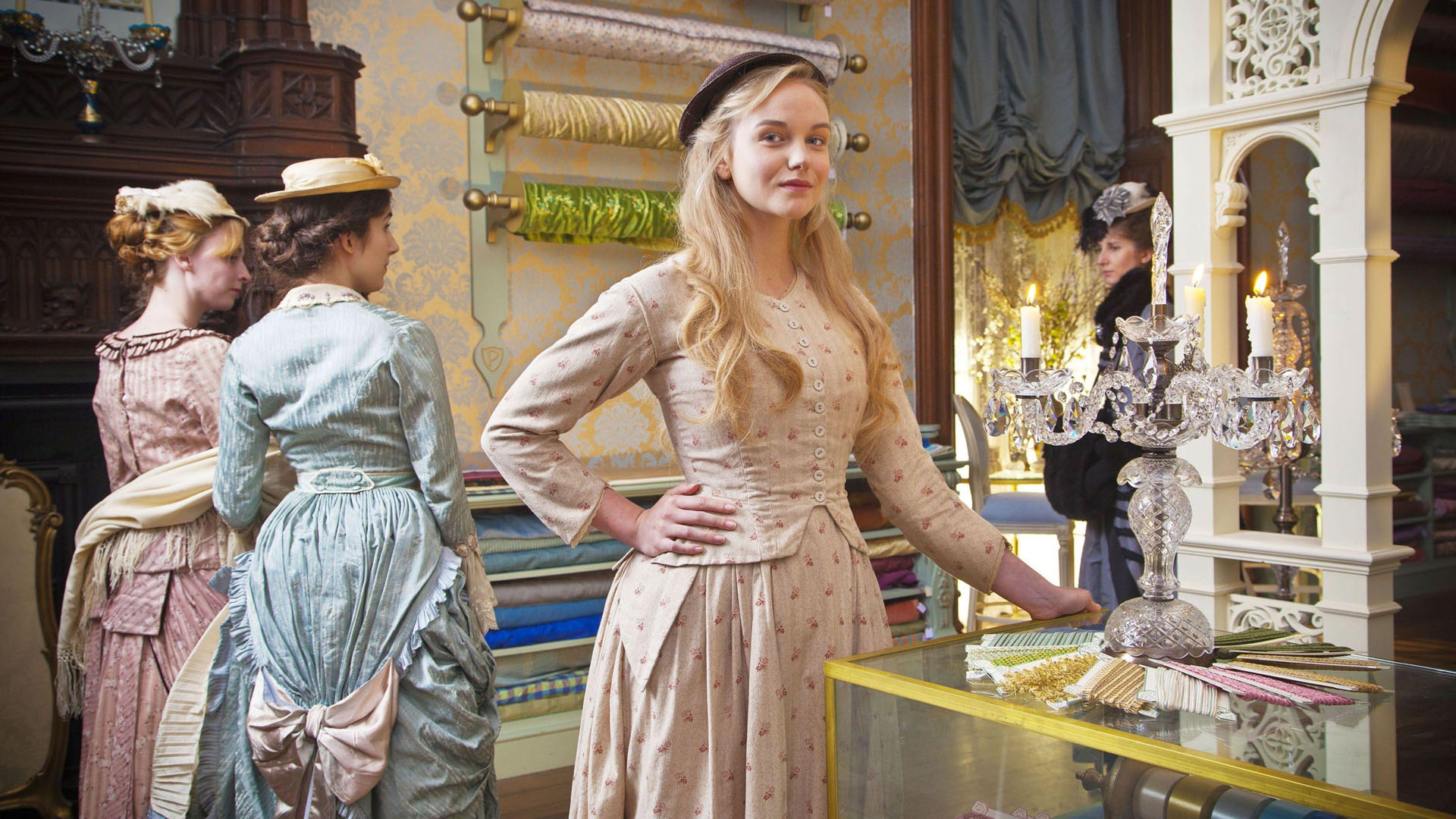 Are we to compare The Paradise to Adam and Eve? Certainly, the store is to tempt the female of the species. Or, as Lord Glendenning puts it “do we really need more perfumes and petticoats?” John Moray replies, “we need to exploit the weakness in women for the purpose of business.” Of course, that cynical response pales in comparison to the scheming of the characters. While John plots to separate you from your cash, Katherine strategizes to trap him into marriage. Denise and Clara elbow each other to become the head of Ladieswear. Both would like more attention from John. No apples nor snakes seen in The Paradise, and they are divinely dressed. But, who knows what’s slithering in the next department.

Set in 1875, The Paradise is the first English department store. So, innovations abound in this eight part Season One from Masterpiece available on Amazon. You get the first storewide sale, purchasing on account, a children’s department, and the shopper of the month. While The Paradise is a feast for the eyes, whose idea was it to put the salesgirls in black dresses suitable for a funeral (see below)? Cancelled after two years, the show fared poorly compared to a rival department store show, Mr Selfridge, despite a very strong 7.7/10 IMDb score. Notwithstanding fine writing and acting, the series seems a bit insular with all the action either at the store or Lord Glendenning’s gorgeous estate. I give the show 3.5 Gavels and it receives a 64% Rotten Tomatoes rating.

Fresh from the Scottish town of Peebles, impoverished Denise arrives to take a position at her uncle’s shop. Doing poorly himself, Edmund Lovett informs Denise that he is unable to grant her employment. With no other options, Denise seeks work at the large store across the street. Miss Audrey is unimpressed, but John Moray demands that they help their neighbor. Clara sees Denise as a competitor, not only for commissions but for the attention of John. Meanwhile, John only has eyes for expansion. To do so, he needs the backing of Lord Glendenning. Katherine Glendenning offers to help but will John have to sell his soul to the devil?

As the smart and beautiful Denise, Joanna Vanderham (Banished) quickly makes an impression on the proprietor, John Moray. Miss Audrey describes her “as so full of ideas that she can’t help herself.” John Moray, played by Emun Elliott seems an unlikely character. Exasperated, Katherine tells him, “are you so in love with your grief that you cannot live?” Not nearly as prominent as in Last Tango in Halifax and Happy Valley, Sarah Lancashire (Miss Audrey) is the boss of Ladieswear and will tolerate no tomfoolery.

Thoughts on females in The Paradise include “life is all the more interesting by the mysteries of women” and “in the end, women make errand boys of us all.” In the end, Moray will take great risks rather than being being “one who stood still.” After all, selling is the art of seduction at The Paradise.

“The dramas, rivalries, kindnesses and treacheries begin almost at once, and as in all the best PBS series, they are well-drawn. Only the finest soap.” New York Daily News

By far, not my favorite Masterpiece series, I found this one too soapy, and maybe sappy. Still, for fashion, it’s hard to beat.