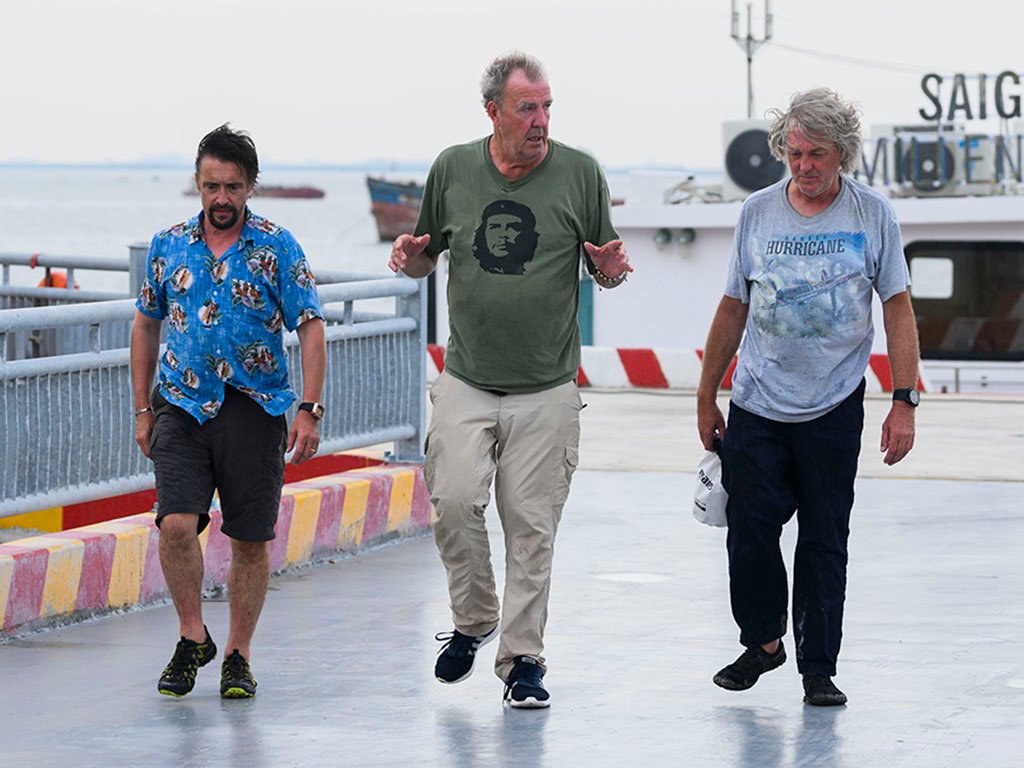 If you want to see Cambodia, Vietnam, and Madagascar as you’ve never seen them, check out The Grand Tour Season Four on Amazon Prime. A family member suggested I watch too much British TV. A valid point made, I ask for suggestions. The Grand Tour was the response, the irony not lost on either of us. Three old English dudes travel the world in their souped-up cars or, as shown above, in boats. These guys were originally in Top Gear, then Jeremy Clarkson got in a bit of trouble, so why not start your own show? They are funny, if at times, a bit salty.

Do you need to watch earlier seasons? Definitely not? Clarkson, Hammond, and May have an easy, competitive rapport with other, clearly borne from years together. To its credit, The Grand Tour is much more than machines as you get history, sociology, climatology, and much more. Ride down the mighty Mekong River. Drag race on the most expensive road in the world. Try to survive the roughest patch of roadway on Earth. As the fellows find out, just when it can’t get any worse, it does. I give The Grand Tour 4.0 Gavels and it receives an 8.3/10 IMDb score.

Neither Richard Hammond nor James May are particularly fond of boats. But Richard Clarkson demands a trip down the Mekong from Cambodia to Vietnam. Each pick out a boat best suited for the trip. One problem–the Chinese dammed up the waters further up north. Just how much did the producers have to pay the Vietnamese for all the boats these landlubbers ran into? It turns out it’s easy to get lost in the Mekong Delta.

Have you ever heard of Reunion Island in the Indian Ocean? The performance cars work nicely on the track, but modifications for Madagascar are slightly more complicated. They wish they could travel fifteen miles in one day.

Jeremy Clarkson is the clear leader of this merry trio. His trademarks are his “height, sarcastic wit and deep voice.” The youngest of the three, Richard Hammond and his impish grin, almost seems out of place. Nicknamed Captain Slow, James May does seem to go at a slower pace than the others. His wit hasn’t diminished as “he lives in Hammersmith, but his neighbors wish he didn’t.” Or “France is a country you have to drive through to get to Italy. That’s all it’s there for.”

Will I give up All Creatures Great and Small for The Grand Tour? No way! But there is room on my plate for travelogues and this one is different than the usual. Truly, they are guys you would enjoy drinking a beer with in a pub. On the other hand, be prepared for a good ribbing.

“The trio’s chemistry remains as brilliant as ever, the toys just cost a lot more.” The Independent (UK)

“The Grand Tour has improved its format to maximize room for hijinks and when Clarkson, May and Hammond get together you’re guaranteed a good time.” Digital Spy

In short, my recommendation? Take The Grand Tour for a spin.