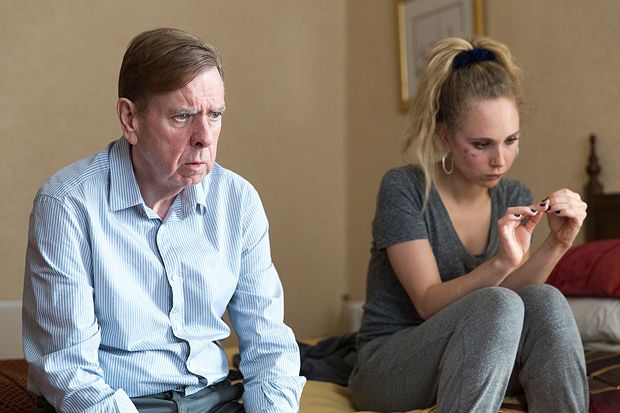 Not to be confused with Hilary Swank‘s recent Away, this article is about Juno Temple‘s Away (2016). From Atonement and The Other Boleyn Girl, to The Dark Knight Rises and Maleficent, Juno has a long and impressive resume. But, it is her role as Keeley Jones in Ted Lasso that swayed me to Away (2016). In Lasso, her boyfriend treats her as the “dumb tart,” yet she is anything but. In this film, she is a similar street smart character, forced into a life by circumstances beyond her control. With great compassion and love and trepidation, Juno Temple is impressive.

Set in Blackpool, England, it is referred to in Away (2016) as “Vegas of the North.” Located on the Irish Sea, north of Liverpool, a seaside resort with rollercoasters and arcades, I’d say more like Atlantic City. Still, largely unknown to Americans, Blackpool looks like a hidden treasure. This colorful tourist attraction, a place of fun and adventure, makes a perfect contrast for an odd couple trying to escape the depression of the loss of a spouse and break free of physical abuse. The constant flashback editing confuses, but the acting soars. I give Away (2016) 3.5 Gavels and it receives a 60% Rotten Tomatoes rating with a 6.8/10 IMDb score.

Joseph interrupts an assault on Ria in a men’s bathroom in a pub. Dex pulls a gun on Joseph who asks him to pull the trigger. Joseph and Ria escape after Ria stabs Dex in the ankle. Regarding Joseph as her “knight in shining armor,” Ria follows him to Blackpool. There, she saves him from a suicide attempt because “I feel safe with you.” Away (2016) slowly peels back the story of Ria and Joseph as you discover how, by chance, their lives intersect. Each has a dark past; both deserving of much better.

Timothy Spall is another of the British actors with a face you never forget and a name you can never remember. The Last Samurai, Harry Potter, The King’s Speech, and Oliver Twist are just a few of his notable works. As the suicidal, despondent Joseph, he is reluctant to befriend Ria. Matt Ryan is the drug dealer/pimp, Dex. Ria tells Joseph “Dex stole from me first!”

“A walking dead man holds no fear of death for his only enemy are the last few hours of life,” quotes Rex. Overall, Away (2016) is a bittersweet film, but worthwhile, found on Sundance. Suicide, drugs, and abuse are never pleasant topics but the nature of the film gives hope. Joseph reminds Ria “you’re only trapped if you allow yourself to be.”

List Film notes “Spall is mesmerising as a ravaged alcoholic; physically scrawny, his desperation is palpable as he inhabits the role with courage . . .” Movie Review World is no less impressed by Juno as “the terrified girl who just wants to scream for help.” Ultimately, very good performances with so-so editing makes this one a mixed bag.