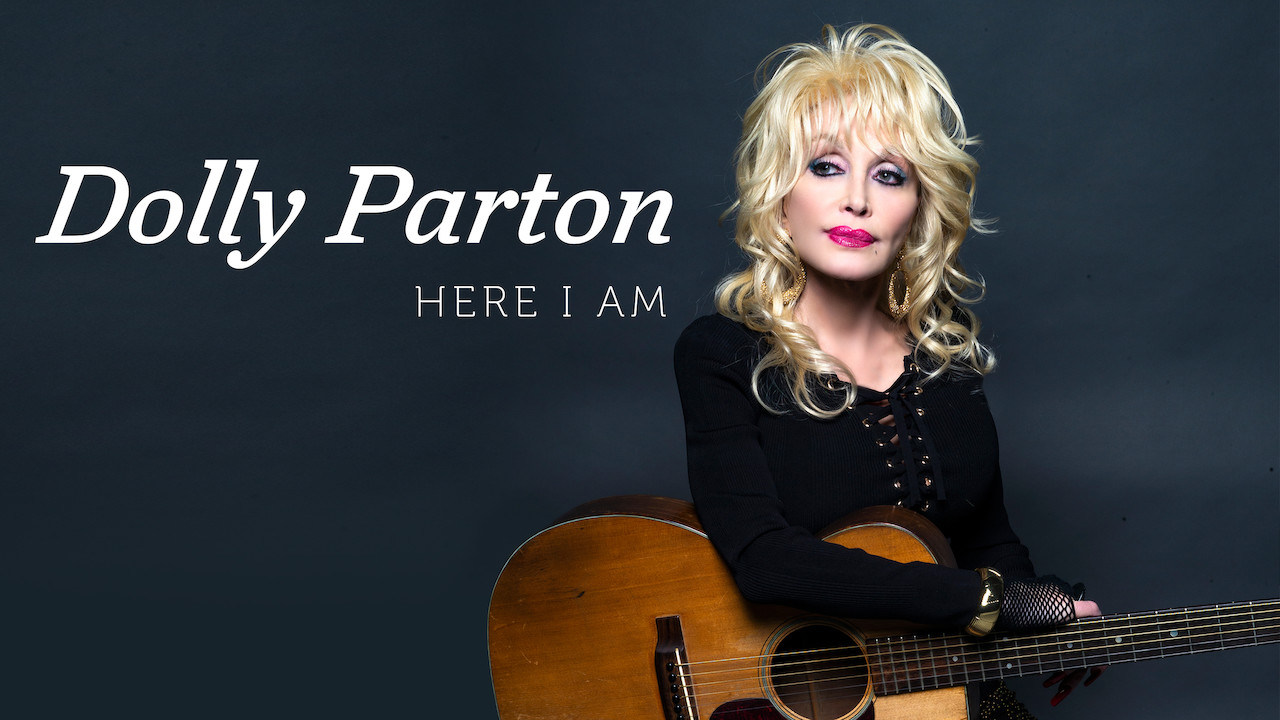 Undoubtedly, longtime fans of Dolly Parton will be thrilled by her documentary, just out on Netflix. Yet, I felt it strangely unsatisfying. We learn a lot about her, but nothing of who she is. In Gordon Lightfoot‘s documentary, he lays himself bare, talking about his alcoholism and asking forgiveness of those he hurt. In Dolly Parton: Here I Am, those closest to her have never seen her without her wig. She’s been married for over fifty years and her musicians have never seen him.

The documentary opens with Dolly describing herself as “totally bizarre and artificial, but real inside.” Kylie Minogue notes that some of her songs have to be the result of suffering some real pain, but the only pain of note is when Capitol Records dropped her from a recording contract in the 1990’s. Notwithstanding these glaring omissions, Dolly Parton is a songwriter with few equals, penning some 3000. The first half of the 90 minute film focuses primarily on the start of her career through the mid-seventies. Her first big song is, inappropriately, Dumb Blonde, which assuredly she isn’t. I give Dolly Parton: Here I Am 3.5 Gavels and it receives a 7.2/10 IMDb rating.

In 1996, Dolly speaks to gender equality with Just Because I’m A Woman. Shortly thereafter, she becomes known nationwide on the Porter Waggoner Show. By 1974, she breaks from the show with the signature song “I Will Always Love You.” Her business acumen in refusing to sell the song to Elvis Presley proves accurate as twenty years later Whitney Houston “made her rich.” By 1977, Jane Fonda pitches an idea of a 9 to 5 movie. Parton agrees if she can write the theme song. Somewhat like Helen Reddy‘s I Am Woman, it’s not a just a song but an anthem. Dolly Parton is a star.

When speaking about interruptions from fans for autographs and pictures, Dolly says “I always wanted to be a star. This is just part of the deal.” Dolly shows us her wigs, makes jokes about herself, and speaks of her roots. Jane Fonda, Lily Tomlin, and Mac Davis speak of the Dolly they know. Of note, Tomlin speaks of the pajama get-to-know-each-other parties with Jane and Dolly. She remembers Dolly as fun but revealing little of herself. What comes across more than anything is that Dolly is a great storyteller within her songs.

There’s clearly more to Dolly Parton than meets the eye. From Jolene to Islands in the Sky, her songs resonate. From Dollywood to Imagination Library, this is no one-horse pony. Witty as ever, Dolly Parton quips “I don’t want to be like everyone else. I would never stoop so low as to be fashionable.”

RNZ posts “Parton’s ability to remain not only a star but a role model and a leader is what makes this film so gosh darn inspiring.” Off The Tracks complains “oddly the 1980s just disappear after 9 to 5 – we don’t get to hear about any of her other film roles or some of the big pop successes of that decade or the creation of Dollywood.” Too much Porter Waggoner years and later, Bluegrass years, I, too, miss the Dolly of the 80’s and 90’s. Will we ever know the real Dolly Parton?