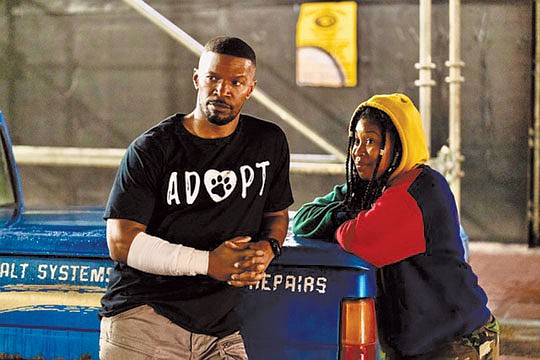 Netflix loves to advertise how their shows, like Project Power, “burn up the internet.” As a captive audience, realistically given only two or three new offerings per week, what choice do folks have? I will say that, budgeted at $85 million, Netflix spends the bucks. Still, convoluted and copycat, a few extra dollars for writers would be a giant leap for mankind. Among others, the super powers of Project Power are Wolverine, Incredible Hulk, and Disney’s Elsa.

Would you take the pill for five minutes of superpowers? What the dealers don’t advertise is that the drug has a mortality rate. Some just die. And, if you survive, until you take the drug, you have no idea what your power might be, sort of a Russian Roulette. Like Extraction, you get name actors, lots of action, and even more nonsense. I give Project Power 2.5 Gavels and it receives a 60% Rotten Tomatoes rating with a poor 53% Audience score.

Tired of being told to stand down against Power Pill popping criminals, New Orleans cop Frank Shaver uses the drug to apprehend the bad guys in an attempt to determine the source. His dealer is high school student, Robin Reilly, who needs the money to pay for her mother’s medical treatments. Both run afoul of Art, an original test subject for Project Power. His daughter genetically possesses powers without taking the pill. Kidnapped for further testing, Art wants her back.

Some think Art is the source of Project Power. Rather, Jamie Foxx is just one cog in the confusion of the script. This is a long way from his Oscar in Ray, but about the same as his role in Robin Hood. Joseph Gordon-Leavitt (7500) is another fine actor caught up in the mess. Just how is it that no one besides his Captain knows he is on the pill? And how does he afford it?

Out heroes track down Project Power to a large container ship. Showing a complete lack of originality, the vessel’s name is Genesis. Unable to gain access to the ship, Frank must tap into his inner-Clint Eastwood. Like the film, let’s say it has mixed results.

The Boston Globe sums up the film with “Project Power is the kind of action/sci-fi bone-cruncher where the cast is better than the material, the characters are more interesting than the premise, and the dialogue chugs along in the middle.” FilmWeek is even less kind. “This film is nonsense.” Overall, it’s just not worth 114 minutes of your time.