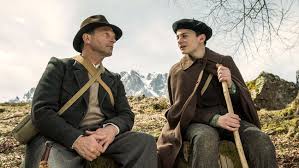 Waiting For Anya is a children’s book about the rescue of French Jewish children from occupied France into Spain. Shortlisted for The Carnegie Medal in 1990, it now appears as a film on Amazon Prime. Although far from Austria and The Sound of Music, the beautiful Pyrenees are a perfect setting for another story “inspired” by true events. Thousands escaped with the help of brave French, and this is one such amalgamation of events. And, therein lies it’s weakness. That combination of stories into one causes Waiting For Anya to lose punch, just not enough material to pull you in. It’s rare that an escape movie has such a lack of tension. I’m not quite sure how the director manages to pull it off. I give Waiting For Anya 3.0 Gavels and it receives only a 38% Rotten Tomatoes rating with a much better 68% Audience score.

A bear attack on his sheep dog causes Jo to return to the mountains to find his beloved pet. There, he meets a mystery man and follows him to a nearby farmhouse. Discovered, Jo learns of an effort to escort Jewish children across the Pyrenees. That rescue is cut short as the Nazis arrive to this remote village. Immediately, mountain patrols and winter cause crossings to come to a halt. Rationing and searches force the escapees into a smuggler’s cave. Moreover, one Korporal seems too friendly. Just what does he suspect?

Noah Schnapp plays the shepherd boy, Jo. It is his vulnerabililty and strength that carries the film. Anjelica Huston (John Wick 3) is Anya’s grandmother and Jean Reno (The Da Vinci Code) is Jo’s grandfather. Reno, especially, is a treat to watch. If there is such a thing a typecasting, this is at least Thomas Kretschmann‘s seventeenth time appearing as a Nazi, just seen in Greyhound.

As the Korporal, Kretschmann is not the typical Nazi seen on the screen. In itself, that gives Waiting For Anya some additional heft. The Guardian shares my overall concerns writing “the film is gorgeous to look at, all alpine meadow flowers and glorious green mountains. But the drama loses momentum pretty early on.” VoiceBoxOffice agrees noting “it’s defanged…there’s a strange disconnect between the horrors of the situation and what the film is presenting.” In the end, I’m certain there is a better story here somewhere. Waiting For Anya needs a re-boot.