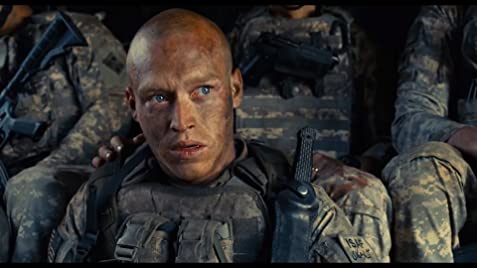 Look at the picture of The Outpost below, and your first reaction will be “whatever were they thinking.” Everyone knows that to defend, you build on the high ground. Yet, because of lack of helicopters, Camp Keating is in the valley (Deadline.com). The Outpost opens that PRT Kamdesh is known as Camp Custer because “everyone was going to die.” Alongside steep mountains protecting the Taliban with Pakistan only fourteen miles away, Camp Sitting Duck is just as apt. Eventually, two superiors receive discipline for failure to improve defenses, although the photo shows how difficult it would be to defend the indefensible.

Ultimately, The Outpost is a story that must be told, properly honoring lives that must be remembered, yet somewhat difficult to follow. Covering so many characters, in helmets and fatigues, is tough enough, but during the fog of this battle, the director does the viewer no favors. Praised by soldiers for its accuracy (nytimes.com), such does little help our understanding. Overall, I give The Outpost 3.5 Gavels and it receives a 92% Rotten Tomatoes rating with no Audience score as yet.

Losing two commanding officers in a short period of time, Camp Keating is to close on July 5, 2009. However, Pres. Karzai wants it to remain open until after the elections and Gen. McChrystal agrees. While the soldiers must try to win the hearts and minds of the locals, the Taliban wants to take the blood and guts of the men. Daily attacks portend a larger strike, one much better organized. On October 3, 2009, 300 Taliban descend upon 54 defenders. The result is the most decorated unit of the Afghan War, but with lots of casualties.

Getting first billing is Orlando Bloom (Dead Men Tell No Tales) as Capt. Keating for whom the camp receives its name. In real life, he died defending the base in 2006. Son of Clint Eastwood, Scott Eastwood (Pacific Rim Uprising) plays Sgt. Clint Romesha, recipient of the Medal of Honor. Despite his wounds, Romesha leads the counterattack to re-take the compound. The second Medal of Honor recipient is Spc. Ty Carter (Caleb Landry Jones). Under heavy fire, he delivers ammo and recovers a fallen soldier.

Director Rod Lurie conveys the “frat-boy” camaraderie of the camp in rough language. It likely befits those under the stress of daily fire. Yet, he also finds screen time for those same servicemen to wax philosophical about death hovering over their shoulders. The Outpost, rated-R, is not for younger viewers. Simply put, The NY Post writes “your eyes are glued to the realistic ugliness.” The Washington Post adds “the most haunting issues the film raises… remain long after the smoke and dust have cleared.” Is The Outpost worth $6.99 on Amazon Prime? Most certainly, but don’t expect a warm feeling of American exceptionalism to wash over you. More likely, a sense of relief that anyone made it out alive.