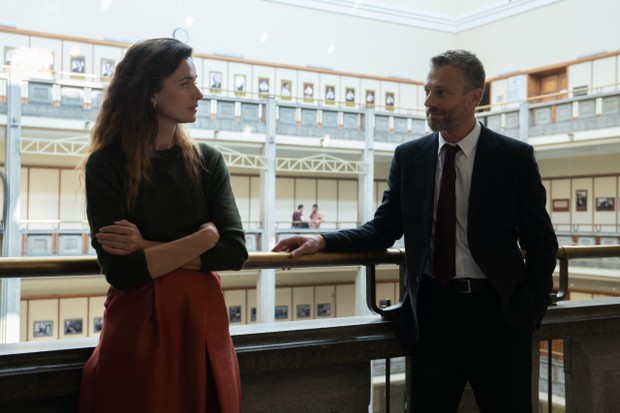 New Jersey-born Harlan Coben seems to be a popular author on Netflix lately. The British version of The Stranger released in January. Now, the Polish version of The Woods appears this month. The website Decider declares that Coben’s “novels lend themselves to TV adaptations because their mysteries are twisty without being confusing.” Anyone who saw The Stranger might dispute that claim, and The Woods is no different.

First, the trailer above is in Polish with English subtitles. Rest assured that the series is dubbed in English. You might want to turn on the subtitles, anyway. Second, although the acting is good and the story intriguing, the production values are not the equal of The Stranger, nor of The Mire, another Polish series. The presentation is just disjointed. Moreover, the six-part series could easily be reduced to three. The Woods is a reasonable effort but slightly disappointing. I give the show 3.0 Gavels and it receives a 6.6 IMDb rating.

In 1994, a high school summer camp ends with the death of two students, and the presumed death of two others. A thorough search fails to find their bodies. One of the missing is the sister of Pawel Kopinski. He was a young chaperone for the camp, and a suspect. His girlfriend’s (Laura) father was the principal of the school and responsible for the safety of the students. Twenty-five years later, Pawel is a chief prosecutor in the district. A detective notifies Pawel that a recent murder victim’s body has clues that point to Pawel as the murderer. Pawel identifies the body as that of the other missing student from twenty-five years prior. Now, is it possible that his sister is still alive?

Grzegorz Damięcki and Hubert Miłkowski portray Pawel in 2019 and 1994. Unknown to Americans, both give strong performances. Likewise, Agnieszka Grochowska and Wiktoria Filus act as Laura 2019 and 1994. Again, we know neither, but the former received the Gold Cross of Merit for contributions to Polish culture from her government.

The Woods presents multiple murders, embezzlement, and rape. (Coben seemingly ignores attempted bribery.) You will wonder how Coben pulls this all together. While the trailer refers to “secrets,” the series really explores the ends to which parents will go to protect their children. Slant Magazine complains that “the story’s rush of exposition can be dizzying, but the pieces fall into place in ways that aren’t entirely unbelievable.” Radio Times adds “The Woods is another solid showing, complete with good performances and an intriguing mystery, but there’s a lack of artistic ambition here that keeps it from elevating to the higher tiers of the genre.” As a result, if you enjoy Coben, give this one a try. Just keep your expectations in check.