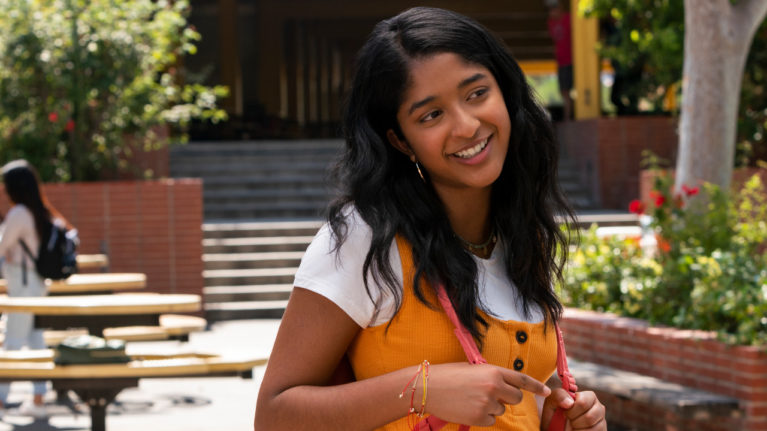 To make John McEnroe the narrator for a 15 year-old Indian-American girl is an act of true creative madness. Couple that with the rapid-fire commentary of Mindy Kaling (Late Night) about life, and you have a show worthy of 100% Rotten Tomatoes rating with a 90% Audience score. The trailer and the early episodes give the impression that these high school sophomores are pretty shallow, making unwise choices for the sake of popularity. In my opinion, the writers try to draw in teen viewers with some “surprising” sexual references (read that Hollywood’s continuing attempt to hyper-sexualize young teens). Once you get past the early nonsense, the competition between the honor students, the mesh of American and Indian cultures, the devotion of the “hunk” to protect his sister, and the overall evolution of the characters is quite remarkable. I give Never Have I Ever 4 Gavels.

Devi, Fabiola, and Eleanor are three best friends, referred to derogatively as the U.N. because of their ethnicity. Devi competes for best student with her arch-enemy Ben Gross. Fabiola is Captain of the High School Robotics team. (The robot’s name is Gears Brosnan.) Eleanor is President of the Drama Club. These girls are smart; now they think they need boyfriends. Of course, their social status leaves them behind the curve in the popularity department.

Chosen out of 15,000 candidates, one would not believe that this is Maitreyi Ramakrishnan‘s first screen appearance. As Devi, she hit all the right notes for intelligence, determination, and tranisiton. Darren Barnet plays Paxton, the ripped “hunk” that all the girls swoon over. Rarely is a character so different from his “public” persona. As Kamala, the cool cousin seeking her PhD from Cal Tech, Richa Moorjani struggles between the love of her Asian boyfriend and the demands of her parents for an arranged marriage.

“You can’t run at night in Los Angeles. It’s the home of Charles Manson and Harvery Weinstein.” “I know there are some real hunks at Cal Tech. I’ve watch The Big Bang Theory.” (Samples of dialogue.)

For background, Devi’s father died eight months ago and she is still dealing with her grief. The sessions with her therapist, played by Niecy Nash (Uncorked), are a mix of shocking, touching, naive, and awkward.

Richard Roeper of The Chicago Sun Times puts it perfectly. “Like “Sixteen Candles” and “The Breakfast Club” and “Pretty in Pink,” these movies and shows depict three-dimensional teenagers who are equal parts sunny optimism and jaded cynicism as they navigate the waters of American high school. We laugh and roll our eyes at some of their more selfish antics. We cringe when things go terribly sideways. And we feel like parental viewing units as these kids hurt and our hearts melt.”

Off to a very unpromising start, Never Have I Ever absolutely rewards those who stick with it. The surprises, as well as the wit, just keep coming. By episode four, this Netflix series really hits its stride, and the last four are dynamic.