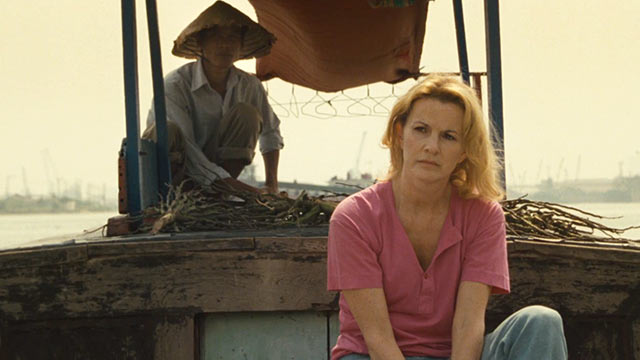 My version of Never Have I Ever . . . is seeing a movie shot in Ho Chi Minh City . . . until now. Noble takes you from the slums of Dublin to the slums of the former Saigon in an unforgettable true story. From childhood to young adult, Christina Noble has everything taken away from her except her spirit.

As a child, her family is torn apart by death, abuse, and alcohol. Abuse follows her as a young woman, gang-raped, and her child ripped from her arms. Yet, she never loses her voice, nor her vision, despite obstacles the size of Mt. Everest. Follow Mama Tina as she goes from nothing to The Order of The British Empire and Medal of Friendship of Vietnam by assisting over 700,000 children and their families. Inspiring may be an understatement. I give Noble 4.0 Gavels and it receives an 82% Rotten Tomatoes rating with a 72% Audience score.

Broken into three parts via flashbacks, young Christina sings in local pubs to earn money, and calm her drunken father. Removed by the Court to separate institutions, she has no love for the nuns. Finally released, middle Christina must live in the woods while trying to earn enough to pay for a headstone for her mother. Her vulnerability leads to another confrontation with more nuns. Mature Christina has a vision of Vietnam, “a country she could not find on a map.” The bui doi, “the dust beneath your soles,” need her help.

Mature Christina Noble is Deirdre O’Kane, middle Christina is Sarah Greene, and young Christina is Gloria Cramer Curtis. All are talented singers as well as actresses. Music is well-represented in this flick. Most of you will remember Ruth Negga from Loving for which she received as Oscar nomination for Best Actress. As Christina’s best friend Joan, you may not know she has an Ethiopian father and an Irish mother. It’s a long way from Ethiopia to the US Supreme Court. Downton Abbey fans will enjoy seeing Brendon Coyle again as will Game of Thrones fans seeing Liam Cunningham.

For non-Cincinnatians, Doris Day is an Ohioan. So what’s the connection? It turns out that Ms. Noble’s favorite singer is Doris Day! Christina and company have a good sense of humor, even in the midst of squalor. “I’m going to live with the bui doi. They have a better class of cockroaches.” “Sometimes love lasts same time as a cigarette.”

As one critic writes, “a moving, dramatic, harrowing and funny story about a quite remarkable woman.” Another notes “the movie works because Christina’s desire to help these kids feels natural, and because she herself shoulders burdens that would drive most people to the grave, all without losing her faith.” Until this film, I knew nothing about the Christina Noble Children’s Foundation. This is truly a noble woman. In other words, put this one on your to-do list.