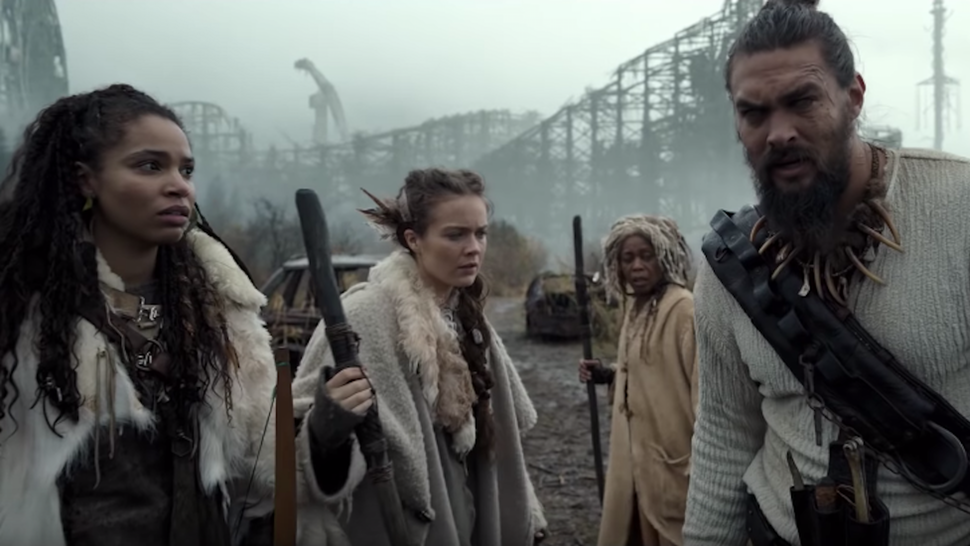 (Note: This review was written in mid-January prior to our own virus apocalypse. The stay-at-home orders make this a good time to post.)

From the director of The Hunger Games, welcome to another dystopian future. In my review of For All Mankind, I note that See has some weirdness to it, but then, aren’t all apocalyptic shows a bit strange? Here, the writers imagine a world 600 years in the future where all are blind due to a virus. Witch hunters seek out any who even hint at sight because it was those who caused the destruction of society. And, they must be eliminated. Visit AppleTV+ to find a vision of how survivors would interact. How do they travel, communicate, find food? Who are chosen leaders and why? How do they defend themselves? Who do they worship and why? I give See 3 Gavels and it receives a 43% Rotten Tomatoes rating with a very good 87% Audience score.

Maghra arrives at the Alkenny tribe, pregnant with twins. Baba Voss, the leader, marries her, happy to start a new family. They find out early that the babies are different, that they have the gift, or curse, of sight. How will they be able to keep it a secret from those who want the children dead? Most of all, each character has their own secrets from the past that expose all to danger.

As a friend observed, Jason Momoa was born to play the part of Baba Voss. The wild, unkempt, huge Momoa would be the undoubted leader of any tribe. Sylvia Hoeks always gets to play strange, evil characters and she does it so well, here as Queen Kane, determined to find the twins. As Paris, mentor for the children, Alfre Woodard is solid, but the part is underwritten for an actress of her caliber. Hera Hilmar is Maghra, mother and keeper of the biggest secret of all.

For a blind culture that banned books, the dialogue of See can be quite sophisticated. Moreover, for a tribal culture, the fighting sequences seem worldly. In other words, to a sighted audience, some of the activities appear unlikely. Of course, the same may be said of any Jason Momoa fight scenes, sighted or otherwise. Filmed in British Columbia, the landscape is magnificent. Strange, then, that Alkenny is actually a bastardization of Allegheny in western Pennsylvania. Clearly, the producers think this will be a hit as the last episode sets up Season 2. Estimated to cost as much as $135 million, that’s a lot of viewers, but then Apple has money to burn. But will it see fit to spend it on See?