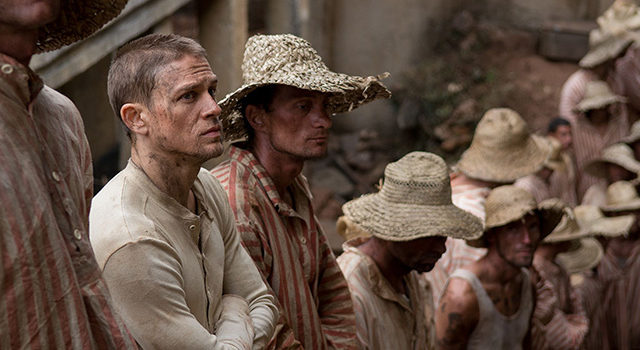 Papillon (1973) with Steve McQueen and Dustin Hoffman is a classic.  I wish I could compare the original with this re-make, but too much time has passed for my feeble memory.  This tale of survival still resonates.  At the end of Papillon (2017), you want more.   What happens  after the events of the movie?  Where did he live?  Did he have family?  Clearly an interesting character, some even question the events of his story.  Whatever the case, the brutal conditions of the penal colony and the will to survive make for a satisfying drama.  I side with the audience score of 79% and give it 4 Gavels.  Rotten Tomatoes lags behind with a 54% rating.

In 1931, Papillon is a thief living the good life in Paris.  After cheating the boss, he is framed for a murder and sent to prison in French Guiana.  On the way, he protects a rich forger, Dega, to obtain money for his escape.  Upon arrival, the warden announces that the guards will shoot anyone who tries to escape.  Further, no one will survive the bush, nor the sharks in the ocean.  If caught alive, it is two years in isolation.  A second attempt is five years in isolation.

Charlie Hunnan (King Arthur: Legend of the Sword) is Papillon and, in my opinion, makes a fine Steve McQueen.  Maybe he doesn’t quite have those piercing eyes, but the steely determination is present.  Rami Malek (Mr. Robot) as Dega is an inspired choice.  He has that weak, weaselly look necessary for the part.  No other actor has anything but a small part.

This is a 2017 movie as it premiered at the Toronto Film Festival last September.  Many critics ask why the re-make?  It is a fair question, but how many are likely to watch a 45 year old movie.  It is a compelling, gritty tale, worthy of its R rating.  If you are in the mood for a light evening, this is not your flick.  How anyone is able to survive these harsh conditions is barely fathomable.  Like all good survival movies, the inner strength that the characters possess is the key.  If you decide to wait for Netflix, view this some night for a nice “escape” from it all.