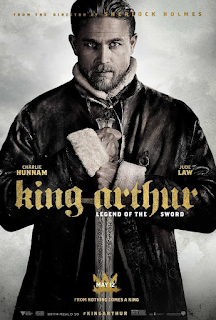 If you were expecting “a more congenial spot for happily-ever-aftering” in Camelot, this ain’t your movie.  In fairness, this is a dark prequel set in the time before the Round Table.  And, since the magic of Merlin and Mordred are involved, perhaps we can forgive some of the outlandish animals created by CGI.  All in all, I found this a fun movie, much better than the critics suggest.

King Arthur, the movie, starts when Arthur is a child. He sees his mother and father killed by his uncle Vortigen. He is raised in a brothel and has no reason to believe that he should be king. Vortigen needs Arthur dead so he can control Excalibur and have absolute control.  Vortigen will do anything for power, and as they say, absolute power corrupts absolutely.

Charles Hunnam (Sons of Anarchy) was believable as Arthur.  Jude Law, as Vortigen, is always a treat to watch.  Djimon Hounsou (Furious 7) as Sir Bedivere, Eric Bana (The Hulk) as Arthur’s father, and Aiden Gillen (Game of Thrones) as Goosefat Bill were great choices.

As the title suggests, this movie is as much about Excalibur as it is about Arthur.  Given the Mordred influence on Vortigen, this is not a Disney version of Robin Hood.  It paints a grim picture of life before Arthur.  Nonetheless, it is a colorful portrait of how one director sees Arthur becoming a legend.  Is it consistent with the story of our youth?  No, but that was just a story, too!  So, sit back and enjoy the ride.