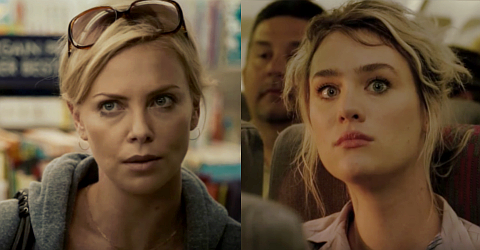 Exhaustion, thy name is Marlo.  Only half-jokingly, I used to say that having kids is exponential.  The second kid isn’t twice as much work, it is four times as much.  After watching Marlo try to manage three kids,  I think my “theory” still holds.  As in The Avengers, I marked down this otherwise good movie because of an unnecessarily contrived ending.  From my perspective, the climax treats a real and substantial medical issue too perfunctorily.  A movie that was very honest about the difficult job of raising children, especially with little help from her husband, becomes a device to show how cute the writer can be to confuse the audience.  The conclusion needs help, maybe a night nanny for the plot.

Marlo is about to have her third child.  Her second child is “special,” his diagnosis never identified, but clearly takes up much of Marlo’s energy.  The school suggests the family hire an aide to assist the child, but the family is not in a financial position to do so.  And then the baby arrives.  Marlo’s brother offers to pay for a night nanny, Tully, so that Marlo can get some rest, even though she will still breast feed.  And Tully turns out to be Mary Poppins perfect, perfect for the baby and perfect for Marlo’s soul.  Marlo had feared the night nanny would be an axe murderer.  Of course, Tully is not; otherwise, this would be a horror film.  Is Tully too good to be true?  The longer Tully is around, the more that Marlo seems to thrive.

Charlize Theron is Marlo and the above pictures show the before and after 50 pounds.  For those who describe her as daring, I remind them that Ms Theron won an Oscar for Monster.  There is no doubt she can act.  Makenzie Davis was terrific as a fiery computer programmer in Halt and Catch Fire determined to start her own business, but here seems miscast as goody two-shoes Tully.  I liked her with more spunk, less free spirit.  Ron Livingston is Marlo’s husband (Drew), a part where he is apparently oblivious to everything, too conveniently as yet another maneuver by the writer.

Most of this film has very good dialogue, especially between Marlo and Tully.  It should surprise no one that the theme centers around the proposition that you can’t take care of others if you don’t take care of yourself.  Marlo ignores the warning signs, Drew is blind to them.  Surely, Tully is the answer.  It is odd that the movie shows no family help, no help by friends or co-workers.  If it takes a village to raise a child, this village was abandoned.  This could have been a very good movie if it either remained a mother-nanny bonding movie, or if it addressed the end topic in more than a perfunctory fashion.  It’s failure to figure out how it wanted to grow up will leave you with an empty  feeling.