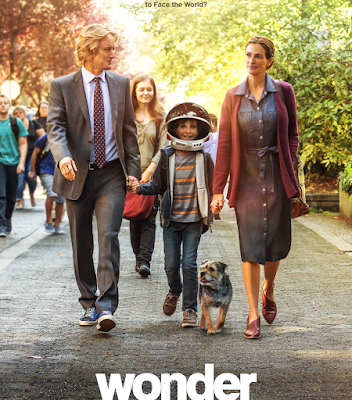 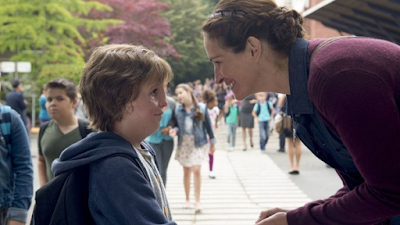 Wonder will not make as much money as Wonder Woman, but it would be nice if it did.  This is a feel-good movie that will bring a tear to your eye, or at least some significant mist. And if you are expecting a Julia Roberts/Owen Wilson vehicle, you will be left behind.  While they are prominent, it is the kids who make this movie.  They are outstanding. This is a movie about Auggie, his sister Via, his best friend Jack Will, and Via’s best friend, Miranda. Each have their own issues, their own story, as they deal with school, relationships, and growing up. It’s not easy being a kid.

In 2012, author R. J. Palacio took her children to an ice cream shop and her 3 year old son became upset after seeing a young girl with a facial deformity.  Palacio immediately took her children and left the store.  Disappointed in how she reacted and failing to make that a learning experience for her child, Palacio wrote a book.  In her book, Auggie has been home schooled by his mother and the parents decide that fifth grade is a time for him to experience the real world.  Everyone is terrified about how kids will react, with justification.  Via, understanding that Auggie is a special child who needs lots of attention, would like her parents to notice her once in a while.  Jack Will wants to be Auggie’s friend but will the peer pressure be too much?  Miranda starts ignoring Via, but why?  Bullying, feeling like you are alone in the world, conformity, and lost friendships are not new concepts in movies, but Palacio weaves them together nicely in a tale about #ChooseKind.

Julia is Mom and Owen is Dad and they are solid.  I still don’t match the two but it grows on you.  Jacob Tremblay is Auggie and his vulnerabilty and strength shine brightly here.  Mandy Patinkin as the principal and Daveed Diggs as the home room teacher are the educators we all want in our schools.  But it is Izabela Vidovic as Via, Danielle Rose Russell as Miranda, Noah Jupe as Jack Will, Millie Davis as Summer (friend of Auggie), and Nadji Jeter as Justin (Via’s boyfriend) who define the movie.  These young actors give the movie its emotional heft.  Watch them closely as you will see them again and again.

After seeing The Star yesterday and Wonder today, one might suspect I am getting too much sugar in my diet.  But as David Edelstein, critic for New York Magazine says, choose kind.  This is not a Christmas movie per se, though the school year does encompass Xmas and there are some references.
One easily understands why this book is read in school, most likely it is even better than the movie.  But this movie has made an impression and has caught the attention of the critics.  My guess is that moviegoers will want to grab a ride.  Fair warning, wherever you watch it, you might want to have a tissue  handy.