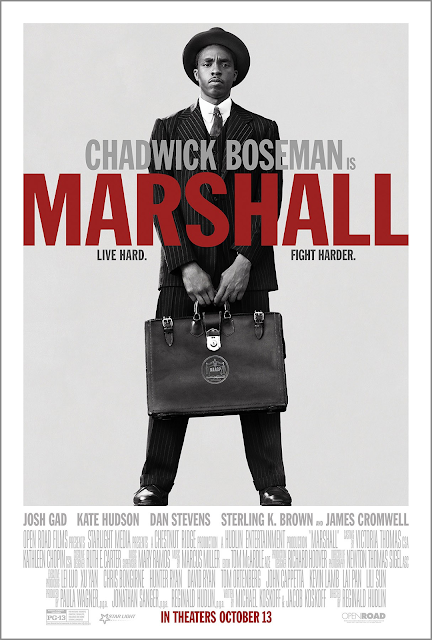 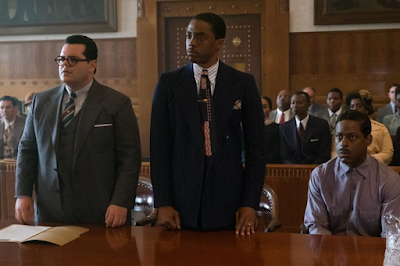 Is it heresy to suggest that Thurgood Marshall was more instrumental to the civil rights movement than Dr. Martin Luther King?  For one argument, see The Case for Thurgood Marshall, Washington Post 2/14/99. When you make a movie about Thurgood Marshall, it better cover a lengthy period of time for a man with many, many accomplishments.  I went to the theater to learn more about this man.  Sadly, this was not that movie.  But, it was still a very good movie about just one of his rape-attempted murder trials.   As in all movies, some artistic license was taken.  For the real story, go to Smithsonian.com “The True Story Behind Marshall.”  Courtroom scenes in movies are rarely realistic, but for the 1940’s, this was probably close.

It is 1941 and the NAACP has but one attorney and that is Thurgood Marshall.  His job is to go around the country to defend black men who he believes are charged solely because of their race.  Marshall ends up in Connecticut defending a driver charged with raping his employer’s wife and then throwing her off a bridge.  He needs local counsel to seek permission from the Court to try the case and a reluctant civil attorney, Sam Friedman, is forced into the fray.  The stakes increase when the trial judge will not permit Marshall to speak.  Friction grows when Friedman realizes that more is at stake than just one man’s life.

Chadwick Boseman as Marshall plays just the right degree of indignation and arrogance.  Josh Gad as Friedman is just as good as the over-his-head but smart, and also barely tolerated, Jewish lawyer.  Kate Hudson is the alleged victim in the case and, perhaps by design, the weakest of the main actors.
Dan Stevens plays the overconfident, born with a spoon in his mouth, prosecutor.  James Cromwell as the crusty old judge, and Sterling K. Brown as the defendant, are familiar to these types of roles.

If you like a good crime/trial movie, you will enjoy this one.  Lies, allegations of subornation of perjury, intimidation, and evidence not what it appears to be, all will pop up in this film.  In the end, though, this movie is made by the interplay between Marshall and Friedman.  These are two men who didn’t want each other, but circumstance forced them to work together.  As you will find out, they both learn something about themselves in the process.  This is not your typical buddy-buddy action movie, but this team is worth watching.