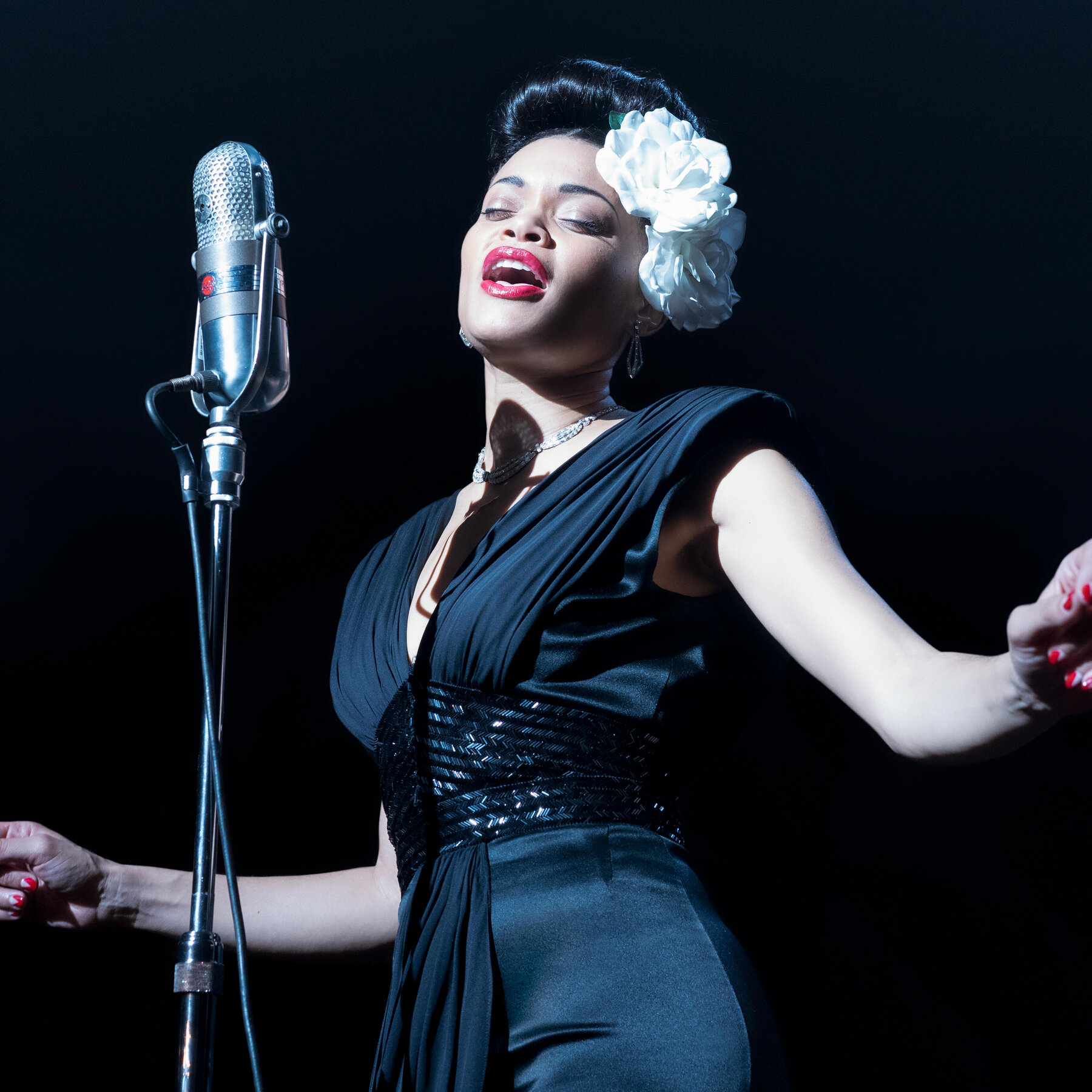 In a string of films difficult to watch, add The United States vs. Billie Holliday. Though the tragic life of Billie Holliday is sad enough, the film alleges she is the target of racism and a war on blacks. Of course, her rampant drug use would be overlooked if she would only stop singing “Strange Fruit.” For the uninitiated, “Strange Fruit” is a song about lynching. Why would the government care? “It reminds them that they are killing us.” But would the FBI go so far as to plant drugs on Billie? The United States vs. Billie Holliday says an emphatic YES.

“This is also your movie if you want to watch men beating each other up over women, men beating women up over men, Black people selling out and exploiting other Black people for clout or money, and an array of cardboard cutout white authority figures tormenting the Black characters.” RogerEbert.com.

After she gets out of prison, Billie Holliday’s first song is “Ain’t Nobody’s Business.” While the title may seem appropriate for a drug user to sing to a cop, the lyrics also include “if I’m beat up by my papa.” If all that is not enough to set off a blaringly loud warning siren, The United States vs. Billie Holliday also gives us a lover as a FBI agent who testifies as to the plant. It didn’t happen. I give the movie 3.0 Gavels and it receives a 58% Rotten Tomatoes rating and an early 5.5/10 IMDb score.

In 1947, Billie Holliday is a star, singing to sold-out audiences everywhere. Her manager tells her “people in high places do not want you singing that song.” Refusing to stop, Harry J. Anslinger orders Jimmy Fletcher to take her down for drug use. Her arrest occurs within two months. Refusing to give up her suppliers, she spends the next year in prison. Urged to keep clean upon her release, Carnegie Hall awaits. Sadly, so does her relapse.

Dead at age 44 in 1959, I have no memory of Billie Holliday. Still, Andra Day (Marshall) gives a searing performance of her as a girl/woman raised in a brothel, raped at age 10, abused and defrauded by males, and targeted by the FBI. “Drugs help ease the pain.” Trevante Rhodes (12 Strong) plays the regretful FBI agent, Jimmy Fletcher. In uneven casting, the remaining characters are caricatures, wildly underdeveloped.

Fletcher struggles with “drugs destroying Harlem” vs. “don’t sing that song.” That’s mainly because the writers struggle with the connection. Moreover, Billie is such an addict that a plant appears totally unnecessary. Pick a time, and you will find drugs. Not long into U.S. vs Billie Holliday, you wonder how she sang so well under the influence of so much heroin.

“Even with the benefit of a stunning performance by Andra Day and gorgeous costumes, [it] misses the mark … [It] can’t decide if it wants to be a politically driven drama, a campy drug-addict saga, or a sappy romance that was fabricated for the movie.” Culture Mix

“None of that potentially powerful material has been organized into effective drama. It’s as if the filmmakers thought they’d have a full-fledged movie if they just kept recycling the ‘Strange Fruit’ element often enough.” Wall Street Journal

For those in need of further caution, expect lots of nudity and use of the N-word. Smoking in a hospital death bed is not something seen in recent years. U.S. vs. Billie Holiday is a chilling portrayal of her tortured life. In summary, if you want something light, avoid it like the plague.