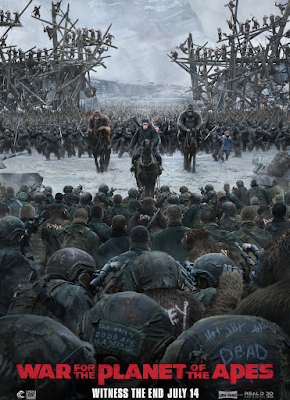 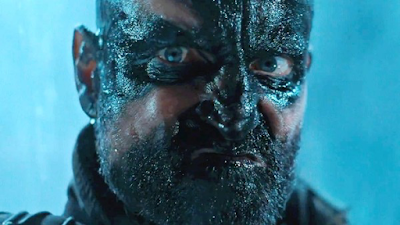 Move over, Wonder Woman!  Get your web out of the way, Spidey!  The Apes are gonna’ climb over both of you.  Great story.  Cute kid.  Hilarious Bad Ape.  Great actors, or should they be called ape-tors?  This movie is every bit as good as the aforementioned and may well be that summer blockbuster.  There are certainly lots of people who won’t go see this movie because of the genre. There are people who will not go see it because they didn’t see the first two in the trilogy.  They will miss a quality movie; it certainly is not necessary to see the first two before you enjoy this one.

To bring you up to speed, a drug for humans tested on apes has given apes human-like intelligence.  It also helped create a virus that has decimated the human population.  The aptly named Caesar is the leader of the apes and wants to live in peace.  However, the Colonel believes that all the apes must be killed to avoid further spread of the virus. The opening scene show the initial battle in the forest. Later,  the battles move into the mountains where Caesar meets the little girl, Nova, and Bad Ape.

Many, many critics are calling for Andy Serkis as Caesar to be included in the Best Actor category. He is that good!  Steve Zahn as Bad Ape steals every scene he is in.  Amiah Miller is wonderful as Nova even without saying a word.  The weakest link in the movie, very surprisingly, is Woody Harrelson as the Colonel.  His bad guy persona just didn’t make it for me; it was like he was acting rather than a natural.

Even at 140 minutes, this movie passes by quickly.  In some movies, Wonder Woman, for example, the fights go on and on.  It makes you think the writers have nothing more to add to the story.  Not so, in this movie.  Each scene continues the plot right up to the end.  No cat naps in this flick.  I am very much anticipating Dunkirk next week, but this movie has set the bar pretty high.  It was well worth the price of admission.