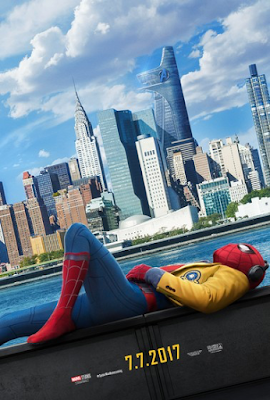 Do you remember the awkwardness of being 15? Add learning to be a superhero and you have Spider-Man: Homecoming.  Homecoming is the dance he wants to take Liz to, but is sure she isn’t interested in a geeky classmate.  Reportedly, the second most anticipated movie of the summer after Wonder Woman, it fills the bill as very good, just not quite as good.  Given the number of cars in the parking lot, it looks like it will make its goal of over $100 million this weekend.

The movie opens by explaining how Adrian aka The Vulture began dealing in weapons made from stolen alien technology.  Next, the movie updates the relationship between Tony Stark aka Iron Man and Peter Parker since the last Avengers movie. Tony tells Peter that he is not yet ready for prime time but, of course, Peter is chafing at the bit to save mankind.  As a cover, he tells his friends that he is on a “Stark internship.”  Eventually, Peter discovers the evil doings of The Vulture, but Tony tells him to stand down.  You should enjoy the computer graphics at the Washington Monument and on the Staten Island Ferry as Peter attempts heroics.

Tom Holland (Lost City of Z) is well cast as a 15 year old Peter Parker.  It is said they are planning the next two Spider-Man movies to revolve around his Junior (out July 2019) and Senior years in high school.  If so, his baby-face may well pull it off.  A big deal was made that Marisa Tomei is too young to be Aunt May but she has a very, very small part here.  Robert Downey, Jr. (who else?) reprises his role as Tony Stark mostly to set up new Avengers movies.  Jon Favreau as Happy has a good part as the liaison between Peter and Stark.  Jacob Batalon as Peter’s best friend and Zendaya as MJ look to have multiple movie deals with this franchise.

Michael Keaton is flying again as The Vulture.  His efforts in The Birdman (which I thought was a terrible movie) serve him well here. The arms dealer turns out to have an interesting connection to Parker.  Tyne Daly, Gwyneth Paltrow, Chris Evans, and Stan Lee all have bit parts. too.

Overall, this is another fun movie for those who are Spider-Man fans.  They could easily cut 15 minutes off the 133 minute length.  However, we must make time for new gadgets and drones.  I think most will be impressed with the new Spider-Man suits provided by Stark with lots of new functions including multiple web slinging options.   Jennifer Connelly’s voice helps Spidey operate the suit and repeatedly offers the “kill” function to the exasperation of Parker.  This movie is worth your money but note that there are additional mid-credit and post credit scenes.