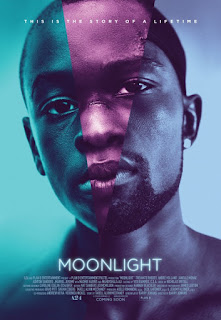 Three years ago, I went to see Dallas Buyers Club with very low expectations, including that of the acting ability of Matthew McConaughey.  I came away thinking I had seen a very good movie and telling friends that McConaughey would win Best Actor.  I approached Moonlight with the same feeling, i.e., if this movie is so good, why haven’t the big theaters picked it up, especially after its Golden Globe win and Oscar vibe?

After the first two parts of Moonlight, I was ready to put it in a similar category as Dallas Buyers Club but, in my opinion, part three was not of the same quality.  Part one is about “Little” who is being bullied by other bigger kids and ignored by his drug using mother.  Her drug supplier, played by Mahershala Ali (and deserving of his Oscar nomination), begins to mentor the young boy while demanding that mom do a better job raising the child.  Ali’s character is an interesting mix of hardened drug dealer yet fatherly to the child but obtusely uncaring to the effects his drugs are having on the mother.

In part two, the child is now a teenager recognizing that he is gay, and dealing with the consequences that others also realize it.  Now referred to with his real name “Chiron,” he must deal with his lack of acceptance as well as violence directed towards him.  Will he fight back or otherwise accept his ostracism?

It is the the third part (where he is now bulked up and known as “Black”), that the movie falls apart.
He is presented as feared drug dealer, but upon meeting his teenage gay crush, he becomes so emotional that he is almost speechless.  Although I agree that humans are extremely complex, Black’s rough childhood made the overt display of emotions lack believability.  Perhaps Black was overwhelmed by finally finding acceptance.  While the first two parts seemed very credible, this last part seemed strained.

Should you go see Moonlight in the theater?  Without the Golden Globe and Oscar attention, I certainly would not have done so?  That said, I highly recommend the first two thirds.  If you go, like me, I feel you will feel disillusioned about the ending.