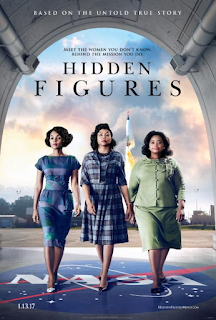 I am mindful of the fact that Tom Hanks told a real-life, skeptical
Sully “I am going to say things you never said.  I am going to go places you never went.  Now what can we do to make this story as accurate as possible?”  Let that sink in . . .  Whatever the case, this is a wonderful story.

By now you know this is a movie about three African American women who break all barriers to become key players in NASA’s race to get Americans into space.  The real genius of the movie is its depiction of absurdities.  The absurdity of discrimination is portrayed comically by Katherine Johnson (Taraji P. Henson) required to make critical launch and landing calculations on deadline but the only “colored” bathroom was 20 minutes away.

Those of us of a certain age vividly remember the number of cancelled and failed unmanned launches of the early Mercury days.  With so much computing power in our hands today,
the absurdity of the mathematicians doing hand calculations is mind boggling.  No wonder so many early attempts ended in explosions.

Punch cards and Fortran were also key to the early days of computers.  For Dorothy Vaughan (Octavia Spencer) to be self taught and still upstage the IBM installers is so absurd to nearly be unbelievable.  These were clearly very remarkable women.

Kevin Costner and Kirsten Dunst properly fulfilled their roles but I found Jim Parsons to be distracting.  While he certainly looks the part of the nerdy engineer, I kept waiting for him to to break out into his Sheldon Cooper act.  He is such a part of Big Bang Theory, and our lives, that we may never be able to accept him in anything else.  Certainly, his next role must be something completely
different from his TV persona.

While not a perfect movie, it is an enjoyable movie.  This is why we love movies.  This is why we go out to movies on cold, snowy nights.  Something for everyone.  History.  Science.  Biography.  Even a bit of a love story.  Hidden Figures will not win Oscars.  It is not as good as Apollo 13; the tension is just not there. But it should be remembered fondly.

BONUS FEATURE.  Some have suggested that I should also talk about other facets of moviegoing.
So, I will start with perhaps its most critical aspect —  POPCORN.  Hands down the best popcorn in the area is at The Esquire, followed closely by the Mariemont.  Not sure if it is the oil or the salt but always consistently top notch.  While the big theater chains (Regal, AMC, Cinemark) are capable of delivering good popcorn, they can also serve up some of the very worst.