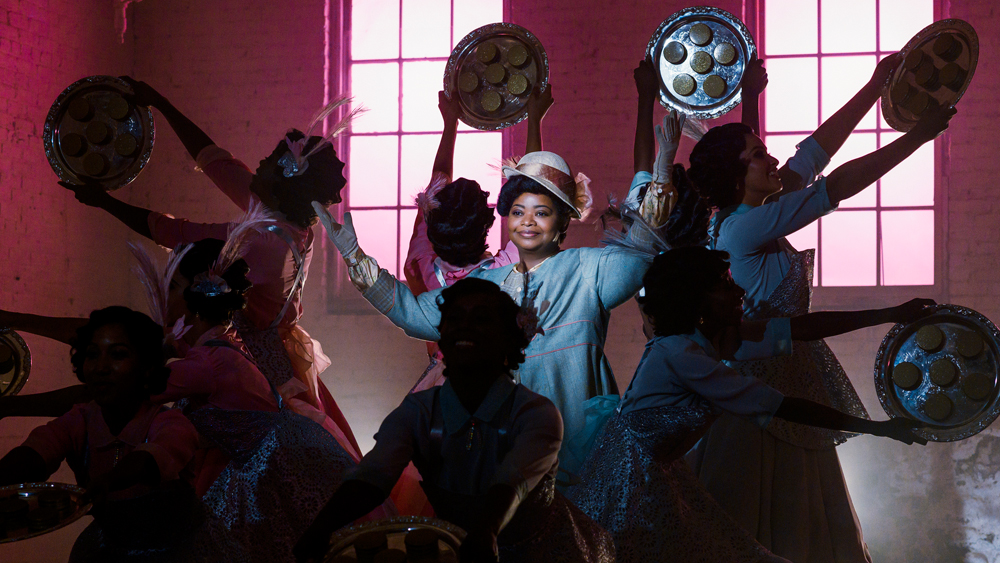 “Wonderful hair leads to wonderful opportunities” is the marketing slogan for Self Made: Inspired By The Life Of Madam C.J. Walker. With little education, Sarah Breedlove turns out to be a natural born saleswoman. In marketing her products to a hitherto ignored audience, she doesn’t just sell “hair grower.” She sells a new way of life. Based on the book On Her Own Ground by her great-granddaughter, we are told that this is entertainment, not entirely factual. (See Decider, History Extra, and Bustle.) Yet, it is clear that Self Made accurately portrays Madam C. J. Walker’s determination to help black women despite racism, sexism, and betrayal. As shown in the featured image, the film, at times, veers into near song-and-dance, wholly out of context. Besides that slight annoyance, Self Made commands 3.5 Gavels and it receives an early 77% Rotten Tomatoes rating and 71% Audience score.

In 1908, Sarah Breedlove, a washerwoman, loses her hair and her confidence. Addie Monroe has the answer, her “smelly” hair grower. Rebuffed in her attempts to sell Addie’s product, Sarah develops her own “better-smelling” hair product and soon outsells Addie. Now known as Madam C. J. Walker, she wants to expand and start a factory. Fire and an unhelpful Booker T. Washington are but two of the obstacles she must overcome.

Octavia Spencer (Hidden Figures) puts her Oscar-winning chops on display as Madam C. J. Walker. She is always fun to watch. Acting as her husband is Blair Underwood, aging nicely since his L.A. Law days from 1987-1994. Tiffany Haddish takes a rest from the coarse characters she usually plays. As Lelia, their daughter, she needs more roles like this, minus the singing. As the over-the-top father-in-law, welcome back Garrett Morris.

For those interested in such things, LeBron James is one of the Executive Producers of Self Made. Like many recent productions, the costumes and the sets nearly overpower the direction. One obvious criticism is that Walker has a much better vocabulary and business acumen than an uneducated washerwoman from the cotton fields. Despite four episodes, we aren’t given a sense of how she gets there. I might note the Netflix series does indicate she was smart enough to hire a lawyer early on. As I read more about her “true” story, I again wonder if that life would be better for the screen than this inspiration. But, as they say in kindergarten, “we get what we get and we don’t throw a fit.” Without new movies on the big screen, this will do.