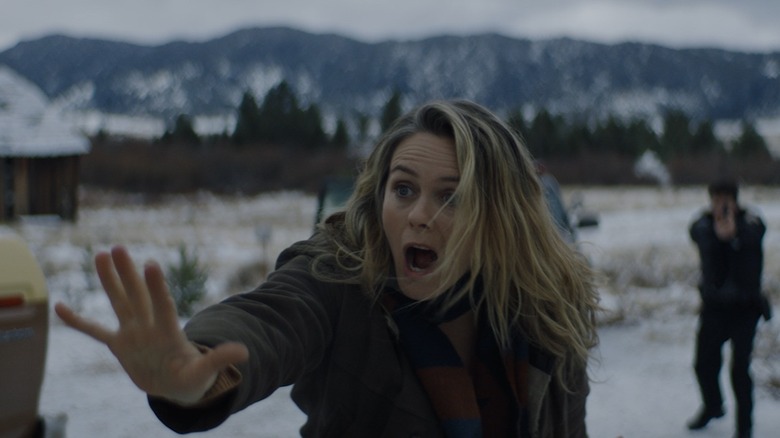 Will I be one of the last viewers of the Last Survivors? Immediately noticing the disconnect between a fine 73% Rotten Tomatoes rating and a poor 4.7/10 IMDb score, what’s going on? It turns out that Last Survivors is bait-and-switch. Advertise the film as a post-apocalyptic world when it is really one of secrets and lies, not very well done at that. Not much happens in the first 70 minutes of the 98 minute movie available on Hulu. Aside from some nice Montana scenery, the director builds little tension as Troy and Jake try to protect themselves from Outsiders. Who are the Outsiders? Nothing but scavengers who will steal everything you have before killing you. You must kill them first!

Such is the world Jake is raised for the last twenty years. “There is no such thing as luck. There are those who prepare for opportunities and setbacks and those who don’t.” After World War III, Troy constantly reminds Jake, “do not trust them. Do not underestimate them.” Well taught, Jake possesses all the survival skills. Yet, he knows not to go outside the perimeter. But, what if all is not as it seems? What if the outside is not the “chaos and marauding” his father portrayed? A woman, an outsider, will change the father-son dynamics. Can she be trusted? Is she a liar, too? What is she doing in the wilds of Montana? In a film built on lies, Last Survivors implodes. I give the flick 2.5 Gavels.

Breaching the first line of defense, Troy suffers a gunshot wound killing the intruder. Jake must leave the perimeter to search for medicine for his father. Ignoring the admonition to shoot first, Jake confronts Henrietta at gunpoint. She seem harmless enough. Still, upon return, Jake lies to his father about killing her. Soon, Troy discovers the lie and wants Henrietta dead before she lets others know their location. Troy and Jake will never be safe as long as she is alive. For the first time in his life, Jake knows his father is wrong. What else might his father be wrong about?

A staple of Pretty Little Liars, Drew Van Acker fills the role of the naive Jake. With that experience, shouldn’t he have figured out the lies sooner? After 20 years, they still have ammunition? It’s been 27 years since we’ve seen Alicia Silverstone in Clueless. I’m clueless to name one thing she’s done since. As Henrietta, she has her own secrets, not played very convincingly. Then we come to the over-the-top Stephen Moyer as Troy, so predictable in his actions. How far down is Moyer on the acting totem pole? His fighter pilot role in Godzilla: King of Monsters is uncredited. (Actually, he won several awards for his part in True Blood.)

Initially named SHTF, maybe the producers of Last Survivors should have kept the acronym. Apparently preppers like the phrase for when Stuff Hits The Fan. In this case, the stuff hit the fan and it made a mess, certainly not worth of your time.

“Some intriguing ideas are compromised by clumsy execution in this muddled post-apocalyptic thriller that struggles to generate consistent suspense or emotional resonance.” Cinemalogue

“Maybe the point of this stock survivalist story was to demo how clueless you can be if you grow up in the wilderness. Maybe that’s why Clueless actress Silverstone was cast. I jest. Silverstone’s mature performance is the best thing about the movie.” Epoch Times

Actually, the best thing about this movie was “The End.”