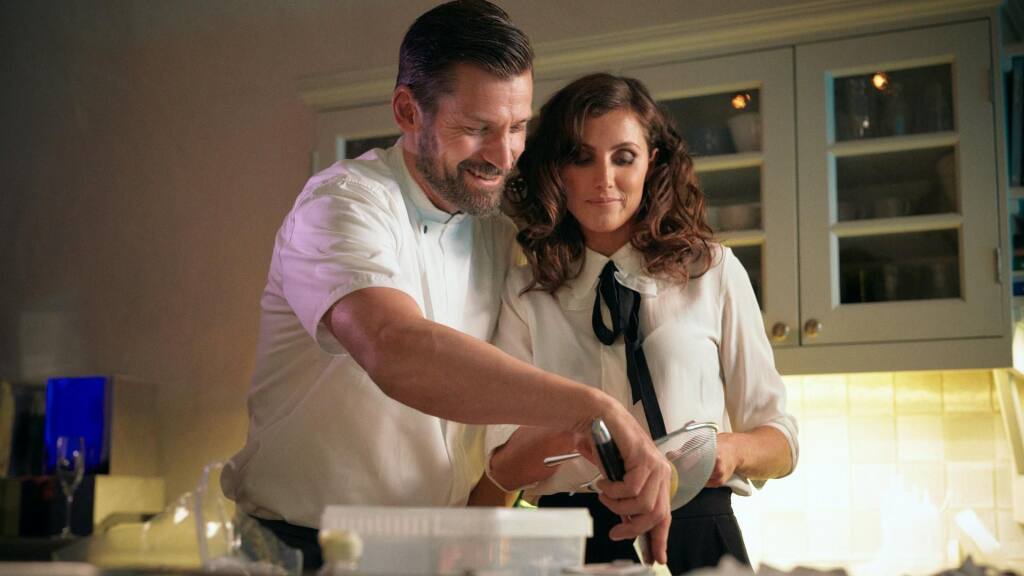 So soon after Toscana, we return to Denmark and the super-competitive restaurant business in A Taste of Hunger. After spending ten years in Japan and becoming a chef, Carsten has little tolerance for those with bourgeois tastes. Working for his brother, a catering job goes south when Carsten serves his own creation rather than the requested sushi. Maggi invades his kitchen and suggests that he make the guests a drink as they await the arrival of the proper dish. The whiskey sours are a hit, especially with Maggi, who insists he should open his own restaurant and get his Michelin star.

Not one to watch cooking shows, films like A Taste of Hunger shows the allure. Mrs. TMJ and I recently dined at a French restaurant set in a country chateau, the food outrageously over-priced but the presentation magnificent. As Carsten points out, if we don’t get that star, we can’t afford to charge the amount to cover the overhead. Bankruptcy looms. Carsten and Maggi hunger for that coveted star, but at what cost to their marriage and their family? Obsession and blackmail rear their ugly heads in this 104 minute film on Hulu, available both dubbed and subtitled. I give A Taste of Hunger 3.5 Gavels and it receives a 71% Rotten Tomatoes rating with a 6.4/10 IMDb score.

Ten years after they meet, Carsten and Maggi finally open Malus, the restaurant of their dreams. While enjoying a night off, Carsten gets word that the Michelin reviewer unexpectedly arrived at Malus. He rushes to prepare the main course, only to discover that an earlier serving went badly. Maggi shows up and hears the bad news, but also intercepts an anonymous note to Carsten that reads “your wife loves someone else.” Their only hope is to find the reviewer before he leaves Copenhagen and get a second chance. To find the reviewer, Maggi needs the help of her former lover, Frederik. It will be a long night.

You know him as Jamie Lannister from Game of Thrones. The acting world knows him as Nikolaj Coster-Waldau (Against the Ice). Obsessed with earning that Michelin star, Carsten ignores his wife and family. Maggi (Katrine Gries-Rosenthal), concerned about her health, turns to solace with former employee, now chef in his own right, Frederik. Transferring from The Restaurant to another restaurant is Charlie Gustafsson as Frederik.

Seeking the Michelin star can be “the portal to paradise or the road to ruin.” A Taste of Hunger throws a nice twist as our couple struggles with the results of infidelity. Even the lowly hot dog gets a solid review in the end.

“It’s a tribute to the sizzle of the central relationship that you want all that silly plot stuff to go away so Maggi and Carsten can kiss some more. They’re the main course, and the most zestful one, in an alluring but overcooked feast.” Wall Street Journal

“A delectable cinematic treat, one that deserves to be savored.” Tribune News Service

Are you shocked that Nicolaj Coster-Waldau is not one of the ten most handsome men in the world for 2022? Robert Pattison and Chris Evans rank #1 and #2 with Tom Cruise at #6 and Chris Hemsworth at #9.