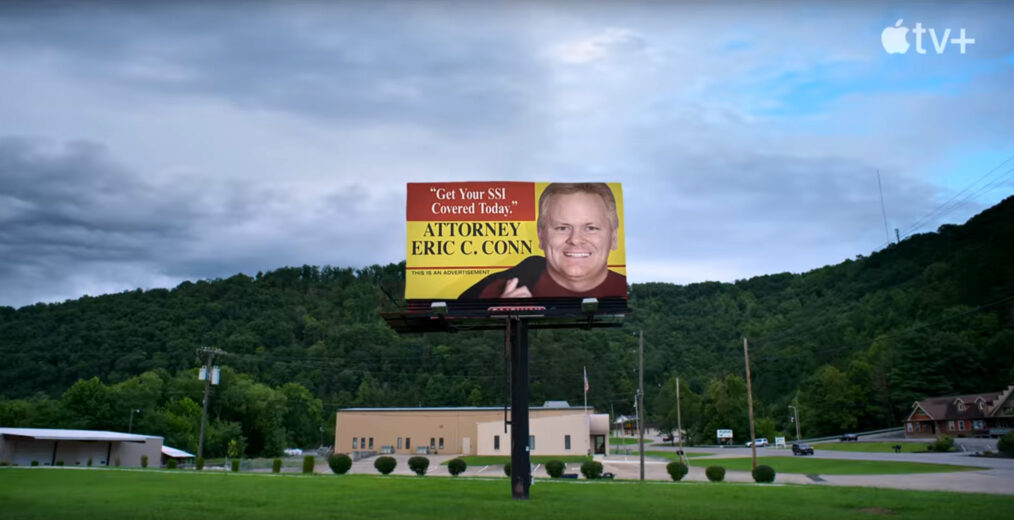 After Dopesick and The Big Conn, one gets the impression that Appalachia is the land of the big scam. The former takes the viewer inside the Oxycontin scandal, the latter informs of a $550 million Social Security fraud. Now on AppleTV+, The Big Conn is a four-part documentary of a dirty judge, a dirty lawyer and a dirty doctor, “a trifecta.” And, despite whistleblowers and a determined Wall Street Journal reporter, the cheating goes on for years. From the first warnings until indictment, the wheels of justice grind, rather do not grind, for ten years. In the meantime, Mr. Social Security and his henchmen get rich off the backs of the U.S. taxpayer.

Too repetitive by half, The Big Conn really is a hard-to-believe story that fails to deliver the impact the crimes deserve. Maybe someday the producers of Dopesick will turn this tale into a drama starring Peter Saarsgard as Eric C. Conn, with Michael Keaton as reporter, Damian Paletta. Until then, we travel to Pikeville, Kentucky home of the biggest social security lawyer in Appalachia and the area’s second largest employer.

In 2006, Social Security Disability employees Jennifer Griffith and Sarah Carver discover Judge Carl Daugherty cherry picks cases, even those assigned to other Administrative Law Judges, and grants immediate approval. Eric C. Conn just happens to be the attorney on each case. Senior Judge Charles Andrus fails to act, nor will anyone else until a Wall Street Journal article in 2011. Senate hearings take place in 2013 with Dr. Adkins admitting the paperwork filled out was pre-prepared by Conn’s office and submitted to him for signature. Rather than answering questions at the hearing, Daugherty attempts suicide and Conn pleads The Fifth. Indictments are still two years away with the five year statute of limitations about to run. Meanwhile, Conn travels the world, works one week per month, and takes 16-17 wives, no one is quite sure how many.

Interviews of key players only in The Big Conn, no actors here. Carver, Griffith, and Paletta describe their efforts, frustrations, and fears to get justice. When Social Security finally acts, Conn’s clients get suspension notices rather than a notices of redetermination. Attorney Ned Pillersdorf discusses the nationwide effort to get attorneys to work pro bono on over 1200 appeals. Conn’s defense attorney, Scott White, talks about the plea and offer to cooperate, then Conn’s escape to Honduras.

The Big Conn has it all. Threats, suicide attempts, Halloween-themed brothel, a James Bond lothario, bail-jumping, Social Security Administration cover-up, and millions in lost taxpayer dollars and damaged lives. Is it fair that the Judge only gets four years and Conn got 27? Was Daugherty really the instigator of the scam?

“There are many, many shots of a door that says ‘CONN OFFICES’ on it. Yes, we get it; it’s the office where Conn committed his con.” Decider

“Some call Conn a type of Robin Hood, who was frauding the U.S. government but ultimately, getting social security and disability payments to his community much faster than the two years it can take through the normal, legal channel. But that argument is a little hard to stomach when he was flaunting his wealth and living a life of flamboyant, opulent luxury on the back of these disability claims.” Yahoo.com

Mostly, I wish The Big Conn was edited better. Granted, Conn and cohorts provide lots of material, but this a another great story, not so well done.