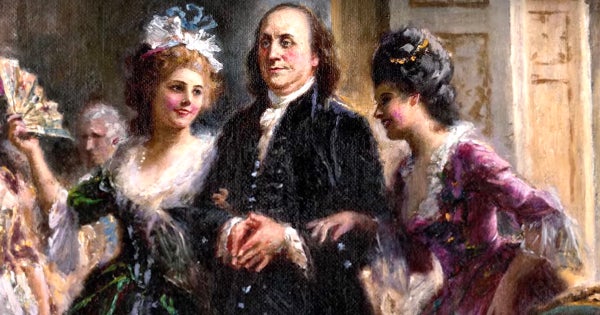 Did you miss Ken Burns’ documentary on Benjamin Franklin last week on PBS? Don’t be hesitant to use the Search function on your TV service to find it. For example, Channel 1389 on DirecTV offers it free through April 18th. Record it and watch it at your leisure. Granted, it’s been many years since my American History education, but this two-part three-hour thirty-minute series seemed particularly packed with interesting Benjamin Franklin tidbits. Celebrated as one of the geniuses of his generation in both America and Europe, he possessed but a second grade education. A runaway at age 17, he becomes the embodiment of the American Dream.

Born in 1706, Benjamin Franklin opens his own print shop in 1728 in Philadelphia. At age 21, he forms the Leather Apron Club to meet weekly to socialize and strengthen business connections. Determined to work for the good of their fellow citizens, that group starts the library, volunteer fire companies, a police force paid through property taxes, a college (now University of Pennsylvania), the American Philosophical Society, and a hospital. Franklin’s Pennsylvania Gazette is so profitable, he opens another shop in Charleston. If that’s not enough, he enters into a common law marriage with Deborah Reed on 9/1/1730. Why common law? Her husband abandoned her and was thought dead. But should he reappear, bigamy was punishable by 30 lashes and life in prison. I give Benjamin Franklin 4.5 Gavels and it receives an 83% Rotten Tomatoes rating with a 8.5/10 IMDb score.

Printer of currency as well as Poor Richard’s Almanac, outselling all but the Bible, Franklin considers retirement in 1748 at age 42. Why not turn to science and tame electricity, invent the lightning rod? Appointed Deputy Postmaster, he establishes home delivery. Later, sent to England, he attempts to keep the Empire together. Over time, Franklin realizes that independence is the only solution, which irreparably estranges him from his son, William. Originally suspected of being a Loyalist, Franklin becomes a signer of the Declaration of Independence and the envoy to France. His “disinformation campaign” about the early American lack of success on the battlefield keeps the French from abandoning the Colonies. Franklin is a “rock star” in France, much to the chagrin of John Adams.

By now, the format of Ken Burns documentaries is well-known. Narrated by Peter Coyote (The Etruscan Smile) and peppered with comments by noted historians, the facts come fast and furious. Particularly, the choice of Mandy Patinkin (Homeland), as the voice of Franklin, with his distinctive, crackly voice is spot-on.

Why the picture below? To memorialize the Treaty of Paris, it portrays the Americans, but the English, so humiliated, refused to sit. In its efforts to weaken the English, the French deplete their treasury assisting the Americans. It will be only a few more years until the beginning of the French Revolution. Benjamin Franklin still has more work to do at home.

“It’s impossible to watch four hours of Benjamin Franklin without respecting his autodidactic scientific brilliance, his cleverness and the unmissable stamp he put on the wet concrete of America.” Hollywood Reporter

“Burns’ film fails to address one very obvious question: When did the man ever sleep? It does not fail to address Franklin’s darker, less attractive side.” Boston Globe

Many historians think the Colonies lose the Revolutionary War without Franklin’s efforts in France. The average life expectancy in this time is the early 40’s. Given Franklin’s lifestyle, it’s surprising that he lived to age 84.